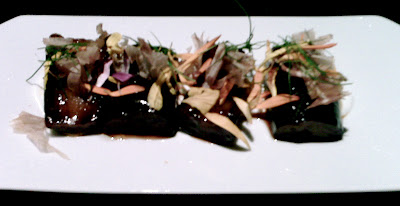 Of all the cooking styles in the universe, from Italian, to French, to Asian, there's one style I've come to love the most. Known commonly as "molecular gastronomy," the famous Spanish chef, Ferran Adria of El Bulli in Spain (the restaurant I most want to eat at before I die) is often credited with pioneering this unique sub-genre of cooking.

Combining equal parts science and artistry, chefs who practice molecular gastronomy regularly try to push the boundaries of our conceptions of food, playing with presentation and flavor profiles, and adding a dash of humor. I've traveled the country seeking out practitioners of MG, having dined at WD-50 in NYC, Coi in San Francisco, and my favorite, Alinea in Chicago. So when Jose Andres, a famous Spanish chef trained under Adria, put his new restaurant into the SLS Hotel in Los Angeles, needless to say, I was excited to see how it measured up to such formidable competition!

On Sunday night, I ventured forth into the Los Angeles night with my boyfriend, Kuzak, and two of my BDFF's at my side. Designed literally like a bazaar, the restaurant occupies a sprawling area so spacious one could

easily get lost perusing its various nooks and crannies. On the right, a virtual Alice in Wonderland like museum of flea market finds and antique china populate the display cases scattered about the room. In the back, there's a whimsical confectionery bar that smells of sweets and coffee. In the middle section of the restaurant, there's the contemporary bar, full of sleek modern designs and bold colors. And to the left, where we were led by our host, we discovered the traditional tapas bar, complete with a leg of Iberica ham resting behind the counter.

So began our culinary indulgence! We quickly observed that the menu was divided into multiple sections, half classified as traditional tapas and the other half as contemporary. Also, while some dishes could be shared, others were specified as per person! In addition to the menu, carts mosey across the floor, offering caviar cones, foie gras popsicles and a range of mixed drinks chilled with liquid nitrogen. After an extensive pow-wow with our server and a serious summit between the four of us on what to order, we settled on a range of choices. If I were to levy one initial criticism, it would be that the menu feels overly complicated, which could be off-putting to less experienced diners, leaving them feeling lost down the rabbit hole.

Our tapas quickly began to matriculate from the open kitchen, landing on our table with a flourish! First up, we had chicken croquetas, a classic Spanish dish. While tasty, they weren't anything special to write home about! Next up, we sampled Adria's famous olives, old and new way! The old way olives are stuffed with anchovies and piquillo peppers, served with a sense of humor in a tin can. The new way olives are actually an olive flavored liquid encased in a gelatinous shell, briny and explosive at the same time! A must try when dining here. 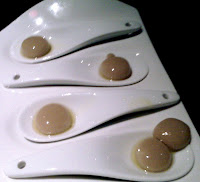 Next up was the humorous "Not Your Everyday Caprese." This dish was a winner featuring balls of liquid mozzarella, reminiscent of the olive presentation, perfectly cooked, skinless whole cherry tomatoes and pesto. Taking it all in one bite, the flavors were clean and flawless. 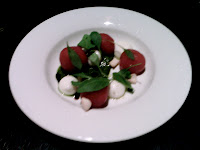 Not Your Everyday Caprese

Many other delightful dishes followed, but here are some highlights. The lamb loin, perfectly cooked, with a layer of gravy flavored gel and a coating of potato foam was a wonderful take on meat and potatoes. The lobster, served with a delicately flavored lobster broth, melted on your mouth. The Japanese eggplant, sweet and buttery, topped with bonito flakes and edible flowers that danced in the heat, was both ingenious and delectable (see top picture)! 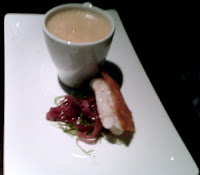 The Lobster with Lobster Broth

Possibly my favorite dish of the night was Andres' new take on the classic tapas dish, Tortilla Espanola. This was a per person dish. He topped a perfectly cooked egg yolk, one of the best tasting foods on the planet, with a lovely heaping of potato foam. Digging the spoon all the way to the bottom to pull up every flavor, this literally dissolved in your mouth. I probably could have eaten a dozen of these, and this morning, I futilely wished I'd doggie bagged one for breakfast! By the time dessert rolled around, we requested our server deliver us his four favorite choices. The clear winner was the Apple Tart, a fabulous combo of caramel and cardomman. 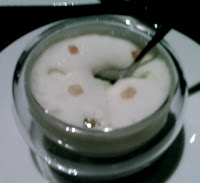 As we made our way out of the restaurant, my mood felt more pensive than celebratory. While we had some amazing food, I had a few criticisms. First, both the space and the menu felt too vast almost for their own good. Perusing the menu could endow one with the feeling of an ADD kid in a candy store, and in fact, The Bazaar happens to play host to its very own candy store. My other main criticism involved the pacing of the meal and the order in which the dishes appeared. They seemed to arrive from the kitchen when ready, rather than staggered in a way to give the meal its proper escalation of flavors. Halfway through dinner, I began to wonder why The Bazaar didn't offer a tasting menu, one that hits the culinary highlights, and ebbs and flows, building in both heft and intensity of flavor. Alas, the wine list also seemed slim, especially when compared to the menu, but perhaps one would be better off ordering the liquid nitrogen cocktails.

But despite these, as I write this review, I'm reminded that a day later, I'm still imagining the phantom tastes of Andres' food and that says a lot. Both challenging and stimulating, molecular gastronomy certainly keeps you on your toes making you rethink what you consider food, the very reason I love it so much! I'm almost positive I'll find myself venturing back to The Bazaar again in search of a little whimsy and titillation for my palate. Next time, I may opt to go more casually, choosing a bar seat and moving around the space, as if it were an actual bazaar, sampling and tasting the various wares. After all, who doesn't love a trip down the rabbit hole now and again?

Email ThisBlogThis!Share to TwitterShare to FacebookShare to Pinterest
Labels: Restaurant Reviews, The Bazaar By Jose Andres