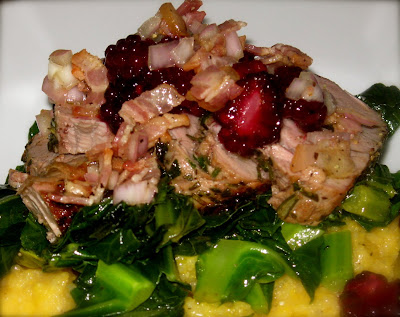 Ms. Piccante Dolce also published a wonderful pork tenderloin recipe! So we offer you two ways to work with the same protein. Click here for her version of his dish!

Saturday night, I finally got around to making the dinner I've been promising for a week: Herb Crusted Pork Tenderloin with Greens & Grits. I topped the dish with blackberries and a bacon & shallot vinaigrette. I must confess that this was my first time cooking pork tenderloin. That's right - I was a pork virgin. How could this have happened you ask in Homer Simpson like horror? Well, it's quite simple. I grew up in a mostly vegetarian household with a mother who converted to Judaism for her first marriage. Just like Walter in The Big Lebowski, even though she got divorced, she held onto a few basic tenants of the faith. Namely, thou shalt not eat pork. Meanwhile, my boyfriend, Kuzak, is also Jewish, and while he doesn't go to synagogue, he too clings to a few tenants, namely thou shalt not celebrate Xmas. And, oh yeah, no pork either, unless it's bacon. Now, where in the Torah it gives the OK to bacon, but not to pork is beyond me. Perhaps, bacon gets a free pass because of it's absolute deliciousness, while pork resides lower down on the food scale, somewhere above chicken, but below beef and bacon, thus not getting the same free pass?

So for years, I resisted the temptations of pork, influenced by my mother, my boyfriend and a twinge of guilt based on the knowledge that pigs are super smart sensitive animals. Like Arnold in Green Acres (yes, I know it's a shameless Pulp Fiction reference). Or Wilbur in Charlotte's Web. But a funny thing happened - Spain! Last year, my Top Chef brother's boss took him on a Mario Batali-like tour of Spain and along the way he fell in love with pig - hard not too when you're in the country that treats this meat like it's manna from heaven. Upon his return, he began buying whole pigs, butchering them down himself (with a chainsaw no less!) and curing his own meats, and they are to die for! From Mortadella to Fat Back, they will make you a convert to pig eating in no time. He's one of the only chefs in San Francisco who makes his own charcuterie from scratch. It's available in his pizzeria along side mouthwatering pizzas and creamy soft serve ice cream (information to follow below).

Suddenly, pork was back on the menu in the Original Diva's (my mother's) household, influenced by my brother, but also by the readily available local supply of all natural pork. It was only a matter of time before I too succumbed to the lure to cook this great beast. Having read enough articles on the health benefits or pork tenderloin, plus having seen the beautiful, all natural cuts available at my Whole Foods, and finally, having pined after a few Charlie Trotter recipes for months, I finally committed to cooking it for the first time. Bravely, I requested a piece of pork tenderloin from the butcher, smiling happily when I saw the price came to only $10 for the whole piece of meat - enough to feed four people. Also, it was packaged in an air tight container and promised to keep in the fridge for a long time, an added bonus if you like to keep a stocked house like me.

Upon arriving home with my lovely piece of meat, I promptly decided to given it the true southern treatment, serving it over organic yellow corn grits, made creamy with a dusting of parmesan reggiano, and organic collard greens. For the pork itself, I rubbed it with olive oil and a three herb mixture. I opted for topping the pork with a Charlie Trotter inspired bacon, shallot & sherry vinegar mixture (and what's more decadent than pig on pig?). And, finally, some lovely organic blackberries that I sauteed in the bacon fat, knowing the acidity and fruit flavors would pair well with the meat. For wine, we settled on a Copain 2006 pinor noir, hoping the delicate fruit flavors and acidity of this mellow wine would pair well with this mild meat, and low and behold, it all worked together beautifully. So without making you wait any further, here's my recipe!

To make the grits, combine the cooked grits with the parmesan. Then season to taste with salt and pepper.

To make the collard greens, heat the olive oil in a saute pan over medium high heat. Add the greens, stirring, until cooked down, about 8 minutes. Season to taste with salt and pepper.

To make the vinaigrette, cook the bacon in a saute pan until crispy. Place the bacon in a small bowl. Whisk in the olive oil, sherry wine vinegar, shallot and season to taste with salt and pepper. Meanwhile, drain the bacon fat from the pan, reserving a small amount. Heat the pan over medium heat. Add the blackberries, sauteing them until softened, about 5 minutes.

To make the pork, preheat the oven to 375 degrees. Rub the pork with the 2 tbsp of olive oil and coat with the herbs, salt and pepper. Place it in a hot saute pan and sear on each side for 5 minutes. Then, roast in the oven for 25 minutes, or until the internal temperature reaches 155 degrees on a meat thermometer. Remove from the oven and allow to rest for 10 minutes, and then cut the meat into 1/4 inch slices.

To serve, place some grits on a plate and top with some greens. Then, place some pork slices on top of the greens in a layer. Put some blackberries around the plate. Drizzle with the vinaigrette. Enjoy! 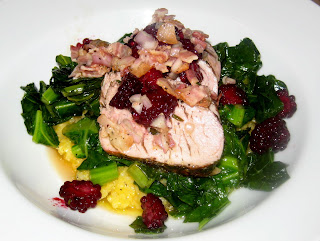 We chose to go with a California pinot noir to pair with this dish, believing

that the fruit flavors, acidity and light body would go well with the pork while not overpowering its delicate flavors. We chose this 2006 Copain, a lovely wine, while not as complex and brilliant as some of their other wines and other vintages, I found that it was a lovely to drink, light and easy on the palette, with delicate berry flavors and nice acidity. It did taste a little bit tight and possibly closed down, and may give more in years to come. However, most importantly, it went brilliantly with this dinner, echoing the blackberry notes, not overpowering the pork, while standing up to the bacon and shallot vinaigrette. Again, I highly recommender checking out Copain! Wells Guthrie is one of my favorite winemakers in California. I promise you won't be disappointed.

Posted by Jennifer Brody at 8:00 AM