This sous vide recipe combines pork tenderloin with a shallot-apple confit, in which the shallots are sauteed in rendered bacon fat, and then doused with sweet apple cider and a touch of sherry vinegar. The sauce is reduced until the shallots are tender and flavorful, perfectly complimenting the delicate pork.

If you don't yet own a Sous Vide Supreme, the sous vide machine for the home cook, then this recipe may be made conventionally by searing pork and then roasting it in the oven to preferred doneness. Finish it with the sauce. 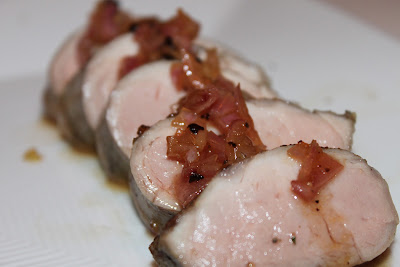 Meanwhile, make the Shallot-Apple Confit by heating the bacon fat over medium heat. Add the shallots and saute until tender and beginning to caramelize. Then, add the apple cider and the sherry vinegar, cooking until reduced and the consistency has thickened into a sauce.

To plate, slice the pork tenderloin and lay out on a plate. Spoon the Shallot-Apple Confit on top of the slices. Enjoy!

organic shallots from the West Hollywood Farmers Market
Posted by Jennifer Brody at 10:45 AM