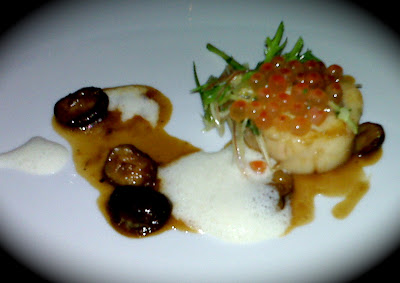 It's Sunday and my house guests, Kuzak's brother and his Chicago Foodie Wife, have departed, bound for their separate destinations, one to Chicago, the other to a different city on a business trip. Living the lawyerly life at a big firm, Kuzak is sequestered in his office, most likely battling his adult onset ADD, hoping to write yet another big legal motion. So it's me and my puppy, the Adorable Monster, left to contain the aftermath leftover after our indulgent weekend out on the town. The Monster is splayed out on the rug sleeping, the perfect mascot for this lazy Sunday. So before I begin cleaning the kitchen and put away the pull out bed, I thought I'd take a moment to reflect on the wonderful meal we had last night at my favorite Los Angeles restaurant, Sona.

The day began slowly with Kuzak, the Monster and I zipping off to puppy class at the local Petco. Faced with a slew of other puppies, including a cute but hyperactive pit bull and its porn-star-looking owner, a large, floppy poodle and a terrier mutt owned by two flamboyantly gay men, the Monster decided to be adorable only, and cowered on the floor at my feet, hoping to avoid getting molested by the other puppies in his butt area. Can you blame him? The class began with the terrier mutt's owners promptly informing the group that they had just switched their puppy's name to Austin from Axl Rose. When asked why, they responded that they discovered that when you yell "Axl" at the top of your lungs, it sounds like "Asshole." Point taken, I thought to myself, as I pictured these two men screaming asshole at each other all day long. Meanwhile, our house guests endured a marathon Russian birthday party in the Valley, complete with tons of vodka and to die for homemade pastries.

We reunited at home, gussied up for our dinner, and drove down La Cienaga, valeting in front of the minimal-looking building that houses Sona. We were quickly escorted to our table, and after some debate, settled on going for the 9 course improvisational tasting menu. For wine, we ordered a reasonably priced Burgundy that opened up beautifully over the first few courses, followed by a move into Rhone. While we waited for our food to begin to pour forth from the kitchen, an argument broke out between the Chicago Foodie and Kuzak about whether the flower on our table was a Chrysanthemum. This argument endured throughout the night, only settled finally this morning with some google image searching. The Chicago Foodie was indeed right. Note that that these sorts of arguments are quite common given that we were all avid policy debaters in high school!

The meal began with a lovely amous bouche - a fried ball of edamame puree in citrus sauce with tiny shreds of duck confit. The 9 course tasting menu is done in tandem, with two different dishes showing up for each course. First up was our sashimi course. The divas had delicate slices of snapper over a chunk of Asian pear masquerading as sushi rice with nori jam. The dudes had big eye tuna with celery root puree and shreds of celery on top. We agreed that both dishes were executed beautifully, but I loved the pure taste of the celery with the tuna. We were off to great start. Next up, the dudes sampled lobster, will the divas munched on crispy sweetbreads with asparagus and walnuts.

Then came the positively decadent foie gras course. The luscious, huge slice of foie gras, grilled to perfection, came accompanied by peanut puree, burnt milk ice cream, brioche, onion and cranberry. This dish was amazingly rich and lovely, but as the Chicago Foodie pointed out, might have been better served as a desert instead of in the middle of the savory courses. After all, she said, what could be better than foie gras for dessert? 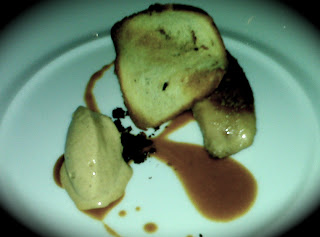 Next up, the divas munched on lovely monkfish tail while the dudes imbibed hamachi (yellow tail). Both dishes were lovely and light, with the prize going slightly to the hamachi. Then, we journeyed into poultry land. The dudes had beautifully cooked squab with artichoke and peas. The divas had Liberty Farms duck breast, cooked to perfection, with ricotta gnocchi, arugula and pomegranate. Both were excellent, with a slight edge going to the duck due to the pillowy soft gnocchi. 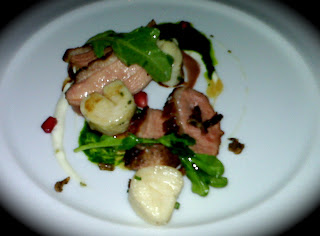 Then, the red meat showed up in the form of beef for the divas and venison for the dudes. This course was not as fabulous as some that came before it, but the venison was lovely and tender with kumquats and fanned out brussel sprouts. 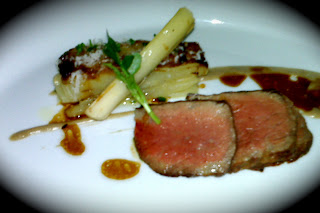 To finish the meal, we had an amazing palate cleanser - rhubard juice with vodka gelee and a sorbet course. This was followed by a fruit-based dessert and then a chocolate dessert. As we dined on these beautifully presented dishes, the ever-critical Chicago Foodie noted that she thought the first few courses were the highlights and that the desserts were her least favorite. She said that while she was intrigued by the complexity of flavors in the sweet courses, she simply didn't love eating them. While I respect her opinion, I humbly disagree, but I must disclose that I dislike heavy desserts after meals, and often would rather eat a salad or bowl of fresh fruit than cake. For me, the beauty of Sona is that when I leave, even after over 9 plates of food, I feel happy and light, not weighed down by the experience (or the chocolate). But to each their own. 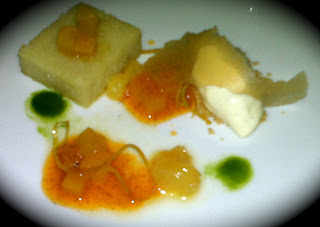 As we drove home late that night, I felt pleasantly happy from both the wine and food, but not overwhelmed. It was a wonderful night of dining, one that I'm glad we could share with our family. I only hope that after the dust settled from the Chrysanthemum argument, they felt the same way. As we remembered great meals we'd had before, I declared that Sona falls high on my rating scale, but below the five star dining experience that we had at Alinea in Chicago. However, that is still high praise coming from me. If you're looking for a special meal and a great bottle of wine, I highly recommend the tasting menu at Sona.