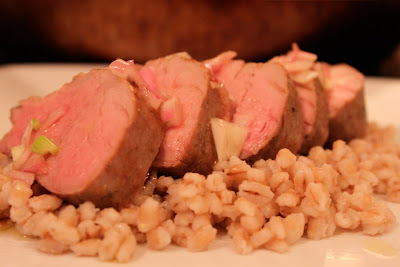 Here is my first post about my new Sous Vide Supreme.

Let me begin by saying that I've only used it six times so far (in two weeks), but already it's life changing. Sous-vide, French for "under vacuum," involves vacuum sealing food into plastic bags and cooking them at low temperatures for extended periods of time in a temperature controlled water bath. In concept, this method of cooking maintains the integrity of the ingredients due to the low temperatures.

A technique frequently used in fine dining settings (my Top Chef Brother does a ton of it, and is my chief culinary consultant in all things sous vide), it's only recently become affordable to the home chef thanks to the Sous Vide Supreme.

Lean meats (pork tenderloin, beef tenderloin) are the most clearly appropriate for sous vide cooking. Not only does it render them exceptionally tender and keep them moist, but it brings them to a perfect medium rare throughout. With sous vide, there is no risk of overcooking.

Cooking sous vide depends on two things—temperature and time.  To assist in learning this technique, I relied on blog posts, the cookbook "Sous Vide for the Home Cook," the temperature charts that came with the Sous Vide Supreme, and my Top Chef Brother's advice. The ubiquitous tomb, "Under Pressure" by Thomas Keller, is on its way (though I've heard it was written for professionals, but we'll see). More on this once I receive the book.

For my very first sous vide experiment, I decided to cook pork tenderloin and settled on a decadent technique. I decided to cook the pork with rendered bacon fat. Yup, you heard me right. I served the pork tenderloin over a bed of pearl barley and topped with a sherry-shallot vinaigrette, wanting to taste the meat. I was not disappointed! The pork was by far the best and most tender I've ever made. It literally dissolved in my mouth in a pool of bacon-flavored meat. This recipe was a winner.

Next week, following my Top Chef Brother's advice—I'll be trying another preparation of pork tenderloin that involves an apple cider brine, a sear, and then sous vide cooking the meat with bacon slices for flavor. I can't wait!

1. Preheat the Sous Vide Supreme to 135 to 140 degrees (depending on how well you want it cooked).

2. Meanwhile, rub the pork tenderloin with the garlic and season with salt and pepper. Place in a plastic bag with the rendered bacon fat. Vacuum seal the bag. Place in the Sous Vide Supreme and cook for at least 2 hours (but you may cook it for longer).

3. To make the vinaigrette, whisk together the olive oil and vinegar and season to taste with salt and pepper.

4. Once the pork has finished cooking in the Sous Vide Supreme, remove from the water bath. Heat the grapeseed oil over medium high heat in a saute pan. Cut open the bag and remove the pork. Quickly sear it on all sides and set aside. Allow it to rest for five minutes before cutting the tenderloin into half inch slices.

5. To plate, layer slices of pork on a plate and drizzle with the sherry-shallot vinaigrette. Enjoy!

organic shallots and olive oil from the Hollywood Farmers Market
Posted by Jennifer Brody at 10:04 AM