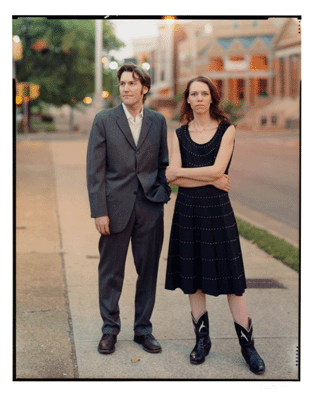 Dave Rawlings & Gillian Welch
Hey Divas, I don't have to tell you that it's Friday! Last night, my boyfriend, Kuzak, and I went to see two of my favorite musicians, Gillian Welch and Dave Rawlings, at a small club in LA called Largo. It was one of those special shows that happen out here sometimes when other musicians stop by to sit in on the gig, including Sean Watkins from Nickel Creek, Jon Brion (produced Aimee Mann, Fiona Apple & Eliot Smith) & Willie Watt from Old Crow Medicine Show. But the biggest surprise of the night was that EMMYLOU HARRIS showed up and sang four songs with them, including Dylan's When I Paint My Masterpiece!!! An amazing night to say the least that I had to share with you. Some favorite song choices include Dead Flowers (Rolling Stones), Cortez The Killer (Neil Young), and a final encore with everyone of The Weight. A very divalicious night to say the least!

Now on to other business! Today, I'm going to take the Adorable Monster to a nearby hiking trail to hopefully exercise the monster-ness out of him. For dinner tonight, I'm going out with a friend to one of my favorite traditional tapas bars in LA, Cobras & Matadors. Even the Diva needs a night out sometimes! We're going to the Silverlake location, a very chill place with a lentil dish that is to die for. I'll blog about my dinner tomorrow. And also tomorrow, I'm cooking pork tenderloin for the very first time ever, so wish me luck. I'm giving the southern treatment with greens and grits, so stay tuned for that recipe as well as many others coming soon.
Posted by Jennifer Brody at 10:16 AM