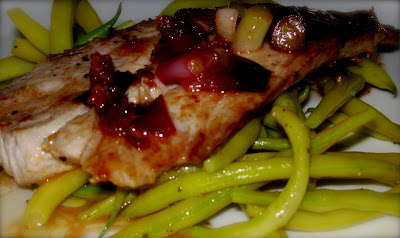 I'm posting this recipe in honor of my faux-sister, the great Beet-Eating Champion of the Caribbean, who shares my first name, so I'll call her Diva Squared. I'm currently ensconced in her father's house outside San Francisco, eating their food, drinking their wine, and having a grand time! I've learned many valuable things from Diva Squared, including that Quidditch is now a popular intercollegiate sport in which boys and girls run around with broomsticks stuck between their legs, pretending they can fly like Harry Potter. Who knew? Tonight, we're off my Top Chef Bro's restaurant! I can't wait to see what he has in store for us. We'll be occupying the private dining room at Picco! I promise to report on the feast.

While Diva Squared mostly sticks to veggies, she also enjoys a little fish now and again, so this recipe is perfectly suited for her tastes. It's light, refreshing, delicious and super healthy - a great way to celebrate the end of summer, as she pointed out! So check out this recipe - I promise you'll love it!

First, blanch the haricot verts in boiling water for a few minutes, until tender but not overcooked. Place in cool water. Once they've cooled, remove from heat and drizzle with a little olive and season with salt and pepper.

Add the olive oil to the same pan and then saute the spring onions until tender. Finish with the lemon juice and season to taste with salt and pepper.

To plate, place some of the haricot verts in the bottom of a plate. Top with an amberjack fillet. Finish with the spring onion sauce. Enjoy!

Bob Dylan - Bringing It All Back Home

Dylan is one of Diva Squared's favorite musicians, and this album is my favorite Dylan album. The song "It's Alright Ma I'm Only Bleeding" is amazing beyond words, not to mention, "Maggie's Farm," "Subterranean Homesick Blues," "Gates of Eden," "Mr. Tambourine Man" and "It's All Over Now, Baby Blue." If you've never heard it in its entirety, I highly recommend checking it out!
Posted by Jennifer Brody at 1:02 PM