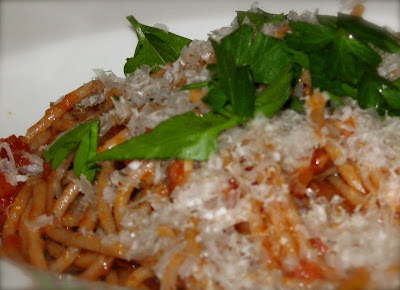 Divas, as promised, I'm here to blog the divalicious pasta I made for dinner the other night from my neighbor, John's, homemade guanciale (cured pork jowl that can be used like pancetta - click here to read the article I wrote about guanciale!). I've made this pasta many times - it's one of Mario Batali's favorites, a specialty at his New York joint, Babo. "all'Amatriciana" literally means that the pasta originated in the Italian town of Amatrice. I love the rich flavor of this dish, but I've only ever used pancetta when making it because I've never had access to guanciale, a popular ingredient in Italy that's rare in this country. 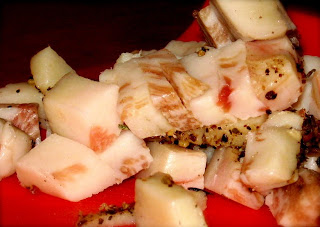 So thanks to John, I had my first chance to work with the protein. The result was spectacular, lending the dish a deeper, meatier flavor than I've experienced when using pancetta. If I had to give this dish a nickname, I would call it Face Bacon Spaghetti! How can you say no to that? Instead of the traditional bucatini pasta (a thick spaghetti with a hole in the middle), I used a whole grain spelt spaghetti that worked wonderfully with the dish, and made it a tad bit healthier at the same time! I served it alongside steamed cauliflower drizzled with good olive oil and sprinkled with sea salt. We drank a lovely bottle of Ampelos Santa Rita Hills Pinot Noir, a wine I've been wanting to try, so scroll to the bottom for my tasting notes.

In a large sauce pan, heat the olive oil over medium and add the guanciale or pancetta, sauting until golden (about 10 minutes). Add the onion and saute until tender, about five more minutes. Add the garlic and chili flakes and saute for 1 minutes. Add the tomatoes and simmer uncovered, stirring occasionally for about 15 minutes. Salt and pepper to taste.

Meanwhile, boil a large pot of salted water. Cook the pasta to al dente and drain, reserving some of the cooking water.

Add the pasta to the sauce, tossing to combine. If dry, add a little cooking water to the mixture.

To serve, place the pasta in a bowl and top with the cheese and parsley. Enjoy!

Kuzak and I have been wanting to try this wine for some time, so I picked 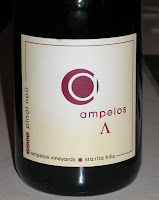 up a bottle the other week, finally popping it open while I made the pasta. I should first confess that I'm a little bit obsessed with Santa Rita Hills pinot, having flipped head over heels for The Ojai Vineyard Santa Rita Hills I had last month. This wine, while not as explosive as The Ojai, had a lot of the same characteristics. Lovely bouquet of ripe cherries and florals, nice structure but still light on its feet. It opened up well over the course of the night, and I would drink it again in a heartbeat.
Posted by Jennifer Brody at 9:30 PM