The Diva Goes to Wine Country! 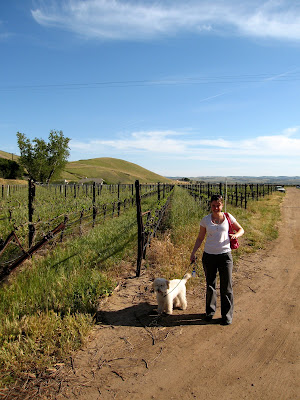 The Diva and The Monster at Tantara (vineyards in the background)

On Sunday, in the blazing California heat, I loaded up my boyfriend, Kuzak, and my incorrigible six month old puppy, The Adorable Monster, and drove up to Tantara Winery for their biannual open house. Known for their single vineyard pinor noirs, they're a favorite of ours. We've been happily drinking their wine for years and were curious to see how the 2007s turned out this time around. As we zipped up the coast, the Monster was slightly antsy in the car, insisting on hopping from my lap to Kuzak's in an effort to determine which of his owners was most worthy of the honor of hosting his furry ass. But all things considered, he did remarkably well for his first long road trip. 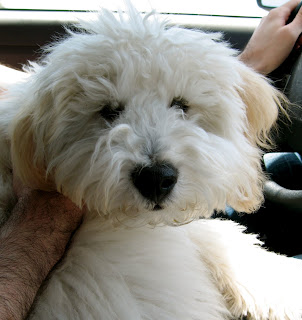 The Adorable Monster in the Car (Sitting in Kuzak's Lap)
We pulled up to Tantara, unfurled ourselves from the car, and walked through the heat and dust to the winery. Band music greeted our ears and the lovely smells of BBQ cooking over an open flame. We greedily loaded up our plates, scarfed down some food while trying to keep the Monster at bay. Frustrated due to his BBQ denial, he munched on a bunch of grass. Then, we began our tasting, first in the shed, and then in the aging room that hosted the barrels where it was mercifully cold and where the best wines were being dispensed. 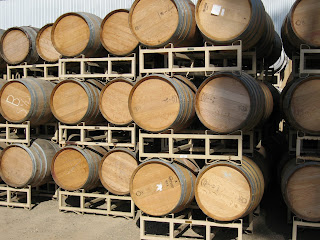 Tantara's Barrels
Loading up our glasses, we enjoyed several different wines, but decided on a few of our personal favorites. Those were:

Tantara 2007 Pinot Blanc - Nice citrus and pineapple fruit, crisp acidity, light on the tongue. The perfect wine for an unseasonably hot day in April, and a favorite at the tasting. While known for their pinot, Tantara makes surprisingly great white wines. $26/bottle

Tantara 2007 Rio Vista - Their lightest pinot, beautifully made, light on its feet, good tannins. This wine also drank well in the heat. 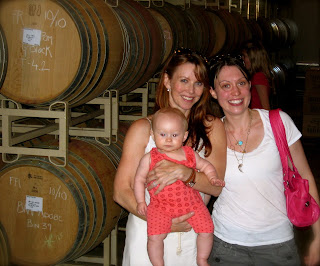 The Diva with Challen (the winemaker's daughter)
and her adorable daughter, Jasper

Tantara 2007 Pisoni - One of our favorite California vineyards, Pisoni supplies wonderful pinot grapes to several winemakers. Tantara consistently makes great use of the fruit, turning it into a wonderful wine with great fruit, nice structure, and both restraint and balance. I highly recommend this wine. 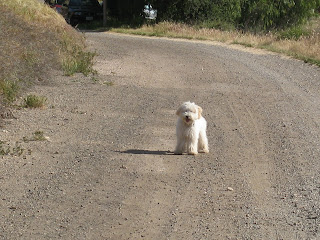 The Monster Gets to Run Free at Tantara

After a great afternoon, we loaded up again and drove into Los Olivos for an early evening dinner at the Los Olivos Cafe, both a wine store and a restaurant. They have a quaint patio that's fortunately Monster friendly. We tied him up to a chair and ordered some white wines, a Bridlewood reserve vioginier and a central coast albarino, a great Spanish varietal that is fresh and crisp. While we feasted on the duck and sea bass, the Monster behaved himself remarkably well, except for when he barked at an obese Labrador Retriever sprawled out a table away from us. After succumbing to the allure of creme brulee, we gave the Monster his dinner by the car and walked him down the picaresque downtown street. 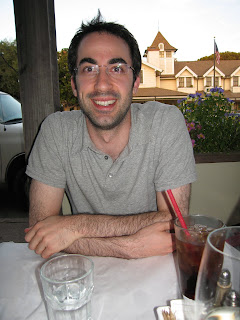 As we hit the road on the way back to LA, I couldn't help but think what a wonderful escape the Central Coast is from the hustle and bustle of Los Angeles. Perfect for a day trip, or even an overnight at one of the many bed and breakfasts sprawled throughout the area, I highly recommend visiting. If anything, it's worth it for the wine alone!