The Adorable Monster Gets a Frisbee! 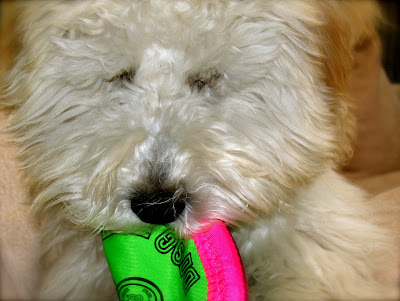 Hey divas, you all know how much I love my puppy, the insatiable, incorrigible Adorable Snow Monster. He happens to be one of the world's most spoiled dogs based on the treasure trove of toys Kuzak and I have thrust upon him - a giant mound in our living room that once prompted the UPS man to ask if we have multiple children. "No, kids in this house," I replied, "unless you count my boyfriend." The fact that our weekly puppy class takes place inside a Petco does not help this fact. Yesterday, after our class in which the Monster was so distracted by the traffic that he wouldn't even sit for me, I rewarded him with a new toy frisbee. For months, Kuzak and I have been fantasizing about training him to be one of those graceful, acrobatic pups we see at the dog park that leap into the air, fluidly snatch a frisbee out of midair and then blithely trot back to their owners, dropping their prize generously at their feet.

Readying the frisbee for its inaugural toss in our living room, I floated it up in the air and yelled the creative command, "Go get it!" The Monster took off from his usual spot on the sofa like a bull charging through a china closet and bounded down the hall, a goofy grin on his face. Then, to our amazement, he leaped in the air on a trajectory with the frisbee as if he had the natural instinct for this game after all. But then, instead of gracefully grabbing the frisbee from the air, he headbutted it across the room in a full on collision of dog cranium and frisbee toy.

"That looked like it hurt," I said, shielding my eyes.

However, the Monster, used to banging his head on foreign objects several times a day, was not to be deterred from his new prize. He righted himself and charged down the hallway, retrieved the frisbee and raced back toward my legs.

"Bring it here, boy!" we both yelled in unison, thrilled that our little part golden retriever was accessing his genetic material and retrieving, but right before he would have arrived at our feet, he veered left and jumped onto his sofa perch and proceeded to chow down on the frisbee, more interested in chewing on it than fetching it. 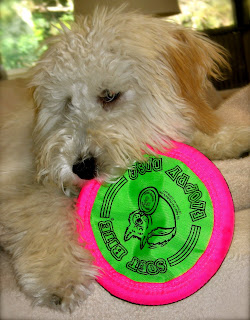 "Frisbee tastes delicious! Diva, you should try some."
"Some retriever," Kuzak muttered.

"I think it's the poodle genes throwing him off," I explained. "It's like he's Dr. Jekyll and Mr. Hyde. Dr. Jekyll wants to retrieve, and Mr. Hyde just wants to sit on the sofa and look cute. Very very cute." 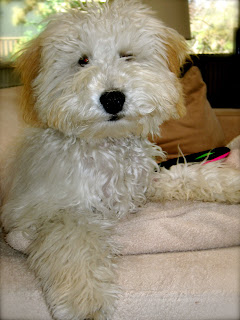 "Where'd my frisbee go?"
With that, Kuzak reached for the frisbee, hoping to try again. "Drop it!" he commanded sternly. Instead of obeying, the Monster commenced evasive action. He wiggled his butt, bowed down on his front legs, and right as Kuzak was about to wrench the frisbee from his mouth, took off around the house like a banshee, taunting us with his trophy clutched tightly in his jaws. As he wound tight circles around the living room furniture like a figure skater with a dysfunctional hippocampus, emitting random Woofs as he went, Kuzak and I watched him with the same expressions I'd imagine we'd wear if our kid was the one eating his own boogers at the playground.

"I guess that's the end of fetch," Kuzak noted wryly.