Divas Night Out At Tasca Restaurant! 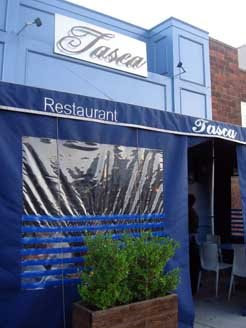 I'm back to report that I had a great Divas Night Out at Tasca last night. My BDFF, Alison, arrived at the bar and professed that she was relieved to have left the two men in her life at home to fend for themselves. No, she's not in a polygamous relationship! She recently gave birth to a strapping baby boy, so her husband was on baby duty while she dined at Tasca with me. We cozied up to the bar and seized on the happy hour menu, pleased by both the offerings and the pricing.

The cute manager & knower of all things wine, Dave, was again working the bar. He told me he'd recently been up to Tablas Creek, one of my fav Paso Robles wineries, and was considering hosting a Tablas themed dinner. I told him how much I'd loved my bottle of 2006 Grenache, which boded well for their other recent releases. Let's hope this dinner materializes because you know I'll be there! He poured us our wines, a South African Chenin Blanc for her and an unusual Rioja that's acidity paired best with food. And boy did we order some food! We feasted on an array of tapas, ranging from buttery tortilla espanola with pepper sauce to light, cripsy salt cod croquettes to garlicky shrimp.

Signaling a server for more bread, Alison confided in me that her secret to chowing down yet staying enviously thin was breastfeeding. "It burns a ton of calories," she whispered in between bites of bread soaked in shrimpy garlicky goodness. She also explained that was why she was still so hungry all the time even though she was no longer with child. "Then what's my excuse?" I wondered aloud, as I ordered seconds on the tortilla espanola and the shrimp. She gave me a blank look. Maybe it's because I too recently had a baby - an adorably monstrous baby that is! Raising a rambunctious puppy burns calories, doesn't it?

As fate would have it, another one of my BDFF's, Ariana, happened to be having drinks at Tasca last night, too. Los Angeles may be a humongous city, but sometimes it feels smaller than a one stoplight town. After Ariana's date shimmied off for the night, she joined our conversation, discovering she shared an abiding love of the Red Sox with Alison, having both originally heralded from Boston. Those Bo Sox really make the world go round. After we paid our bills and went our separate directions, I realized that sometimes life doesn't get much better than a glass of wine, good friends and who can forget the garlic shrimp? The honorable mention goes to the tortilla espanola.

Click here to read my earlier full review of Tasca from last month.