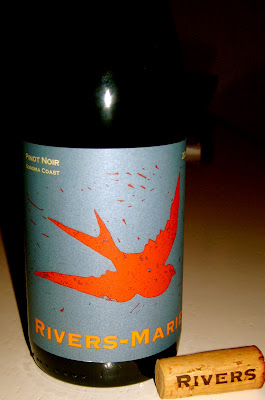 The brainchild of Thomas Rivers Brown and Genevieve Marie Wels, who met while working at Turley in 1999, Rivers Marie makes small production, single vineyard pinot noir in the Sonoma Coast region of California.  How small you ask?  Well, on the high end, they may produce as many at 225 cases, or as few as 84 cases, which is very small!  Another bonus?  Robert Parker doesn't even review their wines, which means they're still under the radar! However, if you ask the wine experts at Domestic Divas, their Burgundian-style pinot noirs rank among the best produced in California.

The 2006 Sonoma Coast Pinot Noir, one of their most affordable bottlings, was drinking beautifully when we popped it the other night.  With a bright nose, great clarity of taste, and nice balance, this wine showcased both great fruit (strawberry & rhubarb) and finesse from the winemakers.  It's young, but drinking awesome right now!

In addition to their pinot noirs, for which they are best known, they also produce great cabernet sauvignon!  In fact, I first fell in love with this winery due to a 2004 bottle of their cab!

So check out their site, sign up for their mailing list for the best deals and taste these wines!  They won't stay under the radar forever!

The Rives Marie 2006 Sonoma Coast Pinot Noir can be found for around $39.95 from select stores or auction sites.

CLICK HERE TO PURCHASE A BOTTLE FROM FLICKINGER WINES!

Posted by Jennifer Brody at 1:15 PM