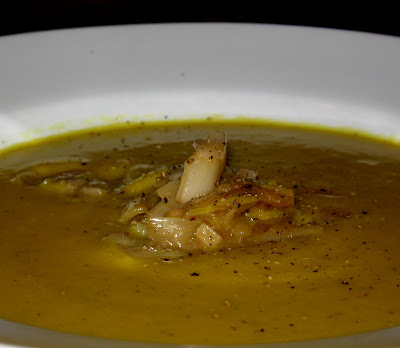 After all the weekend's Xmas festivities, plus the surprise baby shower my book group threw for one of our members, I was so exhausted, I fell asleep at nine o'clock last night and slept like a baby all night long.  The good news?  I'm well-rested, refreshed and ready to blog another Meatless Monday recipe for your viewing pleasure.

Today we're going back to soup-land, one of my favorite places to reside, whether it be lunch, dinner or any meal in between.  Also, since the winter squash is still rolling in hot and heavy at the farmers market, this recipe is a great twist on the classic roasted squash soup.  I added toasted curry powder and coconut milk, which is a great way to make this vegan soup a little bit "creamier" without using the cream.  Then, for an added element of flavor and texture, I topped it with some delicious ginger-braised leeks. 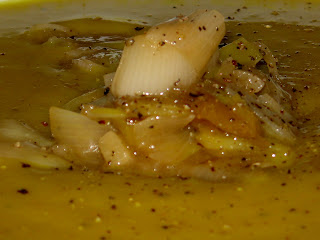 Wow!  This soup fires on all flavor cylinders!  It's spicy, sweet, creamy, rich, everything you would want.  This would be a great holiday soup to start any meal that awakens your palate without overpowering it.  For a neat trick, serve a small portion of soup in shot glasses as an amuse bouche to begin your meal.

Place the acorn squash in a roasting pan.  Rub the inside of the squash with the olive oil, thyme and chili flakes.  Sprinkle with salt & pepper.  Turn the squash face down and poke holes in the skin with a knife.  Place the squash in the oven and roast for about 50 minutes or until cooked through.

Meanwhile, to make the ginger-braised leeks, saute the ginger in the 1 tbsp of olive oil over medium heat for two minutes.  Add the leeks and saute for one more minute.  Then, add the stock and bring to a simmer.  Cover, turn the heat to low, and continue to cook the leeks for about twenty minutes, or until all of the stock has been absorbed.  Season to taste with salt and pepper.

Remove from the oven and allow to cool.  Once cool enough to handle, scoop out the flesh from the skin and place it in a blender.  Add the toasted curry powder, garlic clove and the vegetable stock and puree until smooth, adding more stock as needed for desired consistence.

Pour the newly pureed soup into a pot on the stovetop.  Stir in the coconut milk and season to taste with salt and pepper.  Slowly bring up to a simmer over medium heat and cook for 10 minutes.

To serve, ladle soup into bowls.  Top with some of the leeks.  Drizzle with good olive oil and top with a little fresh cracked black pepper.  Enjoy! 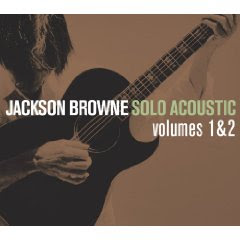 Alright, I'm gonna wager that while most of my dear readers are familiar with Jackson Browne, or at least, you've heard "Running on Empty" pumping out of your radio a handful of times, but you probably don't own these two incredible albums, now available as one collection.  Over the last many years, acclaimed singer-songwriter Jackson Browne has developed a huge cult following for his solo acoustic shows, beautifully captured on these two live albums, the first of which received a Grammy nomination (not that it means anything).

The songs on these albums range from the familiar ("The Pretender") to the obscure to the familiar that you may not know he helped write (The Eagles "Take It Easy"), but they all have one thing in common - Browne's skills as a master songwriter.  So check out this album!

Bonus Tip!  For you LA-area residents, I have a special insider tip for you!  On this Wednesday (December 16th), Jackson Browne will be appearing at Largo as a special guest at the Watkins Family Xmas Show, featuring siblings Sean and Sara Watkins (Nicklecreek) and their fantastic bluegrass band of players.  Other special guests include Grant Lee Phillips and Tom Brosseau! I've already requested my tickets, so viist the Largo website for more information.