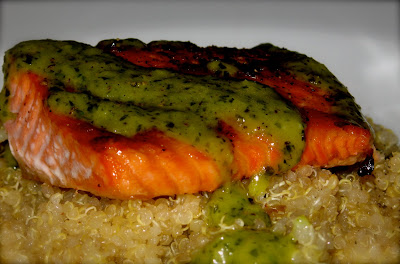 As we're coming up on crunch time for our Thanksgiving binges (I'll be in the great city of Des Moines this year!),  I thought I'd share a quick, light, tempting little dish that I threw together for dinner the other week!  It's New Zealand Trout with Cilantro-Lime Vinaigrette!

I simply broiled the fish and then threw all the vinaigrette ingredients into my mini-prep food processor, and dinner was done in under thirty minutes.  I served my fish over quinoa, and a nutty, protein-packed whole grain that cooks up in fifteen minutes flat. I loved the vinaigrette so much, that I was eating it on my breakfast burritos for days afterward!

Note: if you don't have access to NZ Trout, Arctic Char or Salmon would both work beautifully with this recipe.

Set the oven to broil.

Meanwhile, rub the fish with 1 tbsp of the olive oil and sprinkle with salt and pepper.  Quickly broil the fish until cooked to preference (I like salmon and this type of trout slightly medium rare) and then remove from oven and allow to rest for 5 minutes.

To make the vinaigrette, using a blender or mini-food processor, blend together the remaining olive oil, lime juice, cilantro, pepper, shallot and garlic.  Season to taste with salt and pepper.

To plate, place a piece of fish on a plate and top with the vinaigrette.  Enjoy! 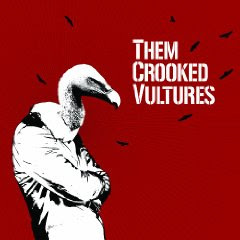 Them Crooked Vultures, a/k/a DAVE GROHL (Foo Fighters, Nirvana), JOSHUA HOMME (Queens of the Stone Age) and JOHN PAUL JONES (Led Zeppelin), is the new supergroup!  They played a surprise show at the Roxy on Monday and a show at the Wiltern last night, to which the A-Girl offered me a ticket, but alas I'd already committed to hosting my book club and made an ungodly amount of turkey meatloaf.  But here's their brand-new, just released debut album!  So check it out - I know I just ordered mine!

CLICK HERE TO LISTEN CHECK OUT THE ALBUM!
Posted by Jennifer Brody at 9:35 AM