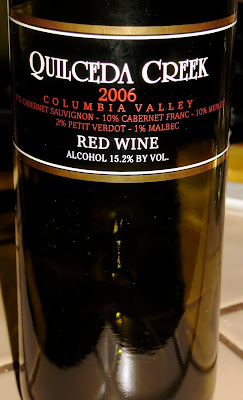 This week, I'm bringing you a very special Cabernet Sauvignon producer that I want you all to know about: Quilceda Creek!

I must confess that we don't drink that much Cabernet Sauvignon these days.  It's not that I don't love it, but the price point over the last several years has climbed higher and higher, meanwhile the local producers in our neck of the woods (Central Coast California) have begun turning out such a fabulous array of Pinot Noir and Rhone-style Syrah and Syrah blends that we've naturally moved in that direction. However, the West Coast cabernet we do drink doesn't typically come from Napa, but rather from Andrew Will (surely more on this winery down the road) and Quilceda Creek in Washington.

Dedicated to the production of the best Washington Cabernet Sauvignon, the winery was founded in 1979 and has produced a string of such fantastic wines, that Robert Parker has called this the state's premier cabernet producer. Quilceda Creek's 2005 Cabernet Sauvignon was rated the coveted perfect score of 100 points by Robert Parker (and luckily we have some in our cellar)!

Today, I'm writing about a bottle we drank last week of the Quilceda Creek 2006 Columbia Valley Red Wine, their lesser priced proprietary blend.  It's made up of 77% Cabernet Sauvignon, 10% Cabernet Franc, 10% Merlot, and the balance Petit Verdot and Malbec.  What an interesting combination of grapes!  We opted to decant the wine, and good choice since it took a good hour to open up, but once it did, we LOVED it!  The wine was medium bodied, with intense fruit, but also enough structure to balance it, and lots of the strong earthy flavors I love in my wines. Parker scored this wine 92 points.

The Quilceda Creek 2006 Red Wine Columbia Valley is a blend of declassified lots which reflect the richness and complexity of the vintage. This is one of our favorite Red Wine offerings to date. This medium bodied wine displays black cherry fruit, cedar, spice, vanilla and minerals. Approachable now, this blend will be best enjoyed over the next 15 years.

While their top wines have higher price points, this proprietary blend was only around $37 on release, a great deal as Robert Parker points out.  Unfortunately, they're sold out of everything actually!  As with many of the wines I write about, the best thing to do is get on their mailing list so you can have access to their limited supply of wines upon release at these fabulous prices.

I did find some bottles for sale from wine retailers, but at considerably higher prices.  Flickinger Wines has 17 bottles available for $65/bottle.