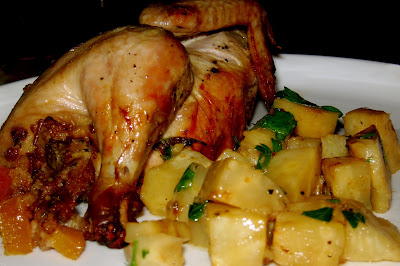 No matter how great we think we are at what we do, there's always someone who's better! Alright, maybe if you're James Cameron and Avatar turns out to be as amaze-balls as I hope in my wildest nerd dreams, that's not the case, but for most of us mere mortals, this nugget of early morning wisdom applies!

I'm often reminded of this with respect to my cooking, when I dine at a great restaurant, or watch a talented chef's cooking show, or read a cookbook, or in this case, when I was perusing November's issue of Food & Wine Magazine.  I stumbled upon a feature on The Four Coursmen, a cleverly named group of amateur cooks who get together to prepare four course meals for lucky diners in Athens, Georgia, one of my favorite cities!  Even back in high school, when I would load upwards of six rubbermaid tubs packed full of research on China into a van that would courie me to policy debate tournaments at The University of Georgia, I loved being in Athens for two reason:

1) The food!  For a small-town girl, I was amazed by the variety - actual VEGAN restaurants?!  How shocking!  I even had a t-shirt from The Grit.

2) Michael Stipe once lived there.  Thus, it was possible I was breathing the same air molecules that once circulated through his lungs! Yes, I'll admit it, I used to be slightly REM obsessive, well, maybe more like a groupie.  I know Kuzak is probably reading thinking, "Used to be?  How about still are!"

So I wasn't surprised to read that Athens plays host to the Four Coursemen!  According to the article, for their dinners, there's no advance menu and they're donation-only.  You can make reservations on their website.  They even have a wine expert who arranges the wine pairings!

I LOVE this idea!  I'm so jealous I didn't think of it!  And so sad at the same time that I'm not in Athens to attend one of the dinners!  I love the wonderfully, casual, impromptu nature of the events, the reverence for food and wine, the pure affection for the craft.  It reminds me a little bit of Beast, Naomi Pomeroy's restaurant where I had the best meal of the year (CLICK HERE to read about it!).  I can only hope that more places like these crop, as we move toward local, seasonal foods prepared simply, but deliciously.

The closest I could come to actually dining with The Four Coursemen was making their food myself at my home!  Using a recipe culled from the article, I lovingly made their recipe for Cornish Hens with Plum-And-Leek Stuffing and Celery Root. 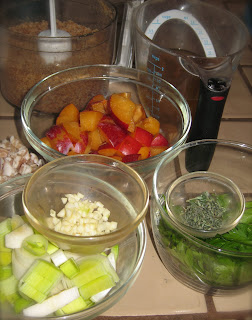 Wow, this dish was a total winner!  The stuffing was decadent, sweet and sour from the plums, rich from the pancetta, creamy from the leeks.  The Cornish Hens, procured from my favorite CSA, Healthy Family Farms, turned out perfectly tender and beautifully bronzed. 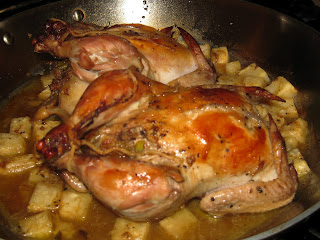 Oh, and the celery root, cooked under the hens, was a complete revelation, having absorbed so much flavor from the chicken, yet retaining their delicate sweetness. 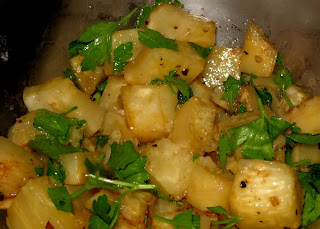 I have to confess, I didn't read the wine pairing note because I already knew what wine I wanted to drink, Tablas Creek 2007 Espirit De Beaucastel (95-97 points Robert Parker and under $40 a bottle).  This wine was fantastic and held up beautifully to the food, and when I finally revisited the recipe, I saw that they had recommended pairing a Rhone blend with the dish, though while they went French, I went Central Coast.  Great minds think alike!

After Kuzak and I finsihed our meal, I realized that I was even more jealous than before!  Not only did they have great ideas, but their food tasted fabulous!  Based on this recipe, I can testify to the fact that these guys are the real deal.  If you happen to be fortunate enough to find yourself in Athens one of these days, I'd recommend checking out The Four Coursemen!

For the recipe for Cornish Hens with Plum-And-Leek Stuffing and Celery Root as published in Food & Wine Magazine, CLICK HERE!

A group of six, they host four course dinners for lucky diners!  CLICK HERE TO VISIT THEIR WEBSITE AND MAKE RESERVATIONS!

This CSA is my go to place for eggs, chicken, cornish game hens, milk-fed pork, ducks, lamb and beef!  They can be found at Farmers Markets, including the Hollywood Farmers Market where I can be found every Sunday. Their animals are all natural, grass-fed and free of antibiotics and hormones. If you email them (email above), you can get on a list to receive what they have available each week, allowing you to pre-order and reserve your product (they often sell out of the higher demand items like the pork and lamb).  Also, for fifty bucks annually, you can become a member and receive discounts on all their products, as well as access to members-only items like fresh goat milk, fresh cow milk, fresh butter and goat's milk ice cream!  If you cook as much as I do, this is a great deal!

This Sunday, I'm picking up lamb loin and bone-in chicken breast, which I can't wait to cook this week!

La Quercia pancetta and organic flat-leaf parsley from Whole Foods
Posted by Jennifer Brody at 10:53 AM