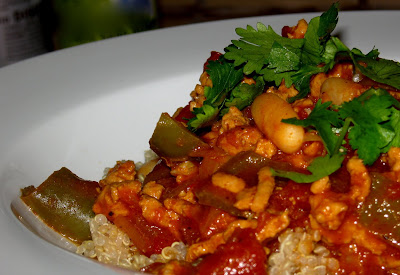 If you're reading this, that means you've made it halfway through the week!  Way to go!  I don't know what you have on tap today, but the Adorable Monster is getting a much-needed trip to the groomers.  Due to his ball choppage, it's been longer than usual since he's had a bath, and let's just say that it's TIME!  Though his hair has grown out and he's looking pretty frickin' adorable lately.

Every time he steals and sock and I go to yell at him, I end up laughing at his cuteness instead.  I just can't keep a straight face!

One of my favorite dishes to make this time of year has got to be White Bean and Turkey Chili!  It's a comforting, delicious, spicy, hearty food that makes your mouth water and warms your bones, but without all the guilt sometimes associated with comfort foods.  This recipe is high in protein (beans and turkey), low in fat and packed with vegetables! Try it out for a simple supper, or make a big batch on Sunday night and eat it all week for dinner!  It almost tastes better leftover.  I love it by itself, or paired with a mixed greens salad for extra health points, or even served over a plain baked potato.

For a fun dinner party idea, do a help yourself chili bar!  Simply whip up a big batch of chili and provide a number of great garnishes for your guests, including cilantro, chopped red onions, chopped peppers, avocado, aged cheddar cheese, or whatever your heart can dream up!  I promise, it will be a major hit!

Note: For my chili, I used dried Bob's Red Mill Cannellini Beans because of their superior taste (compared to canned beans), however this is more work intensive.  They need to be soaked over night and then simmered in water, before being added to the chili.  So for those of you who are feeling adventurous, you're welcome to give this a try!  I purchased my dried beans at Whole Foods and they can be cooked per the package instructions!  However, for the sake of busy divas everywhere, I'm writing the recipe with canned beans!

Next, add the ground turkey, breaking it up as you combine it, and continuing cooking until well-done, about another 6 minutes. Once the turkey is cooked, add the chili powder and cumin, stirring it into the meat mixture, and cook for another minute.

Add the tomatoes, stock, bay leaf and half of the cilantro, and bring the chili to a simmer.  Cover partially and simmer over medium-low heat for about 40 minutes, or until the chili has reduced slightly and begun to thicken.  Season to taste with salt and pepper.

To serve, place some brown rice or quinoa in a bowl and top with a generous helping of chili. Garnish with some of the remaining cilantro!  Enjoy! 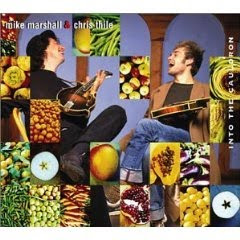 For all you bluegrass fans and newcomers, Chris Thile is a name you have to know!  He's one of the founding members of Nickelcreek and one of the best mandolin players in the world! I've had the pleasure of seeing him perform a number of times, and he never ceases to blow me away with his musicianship.  This collaboration is a great album that showcases the range of the mandolin on songs that range from jazz to bluegrass to quasi-classical!  I listened to it last night while I cooked up a snazzy dinner - it was truly inspirational!


CLICK HERE TO CHECK OUT THIS GREAT ALBUM!
Posted by Jennifer Brody at 7:55 AM