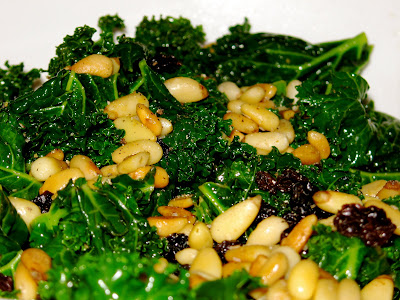 This one little four-letter word has the power to strike fear into the heart's of even adventurous veggie eaters.  Of all the cooking related questions I get asked, "How do I cook kale?" has to be in the top five.  Maybe even the top two.  It's fear-induction may be related to its bitterness and toughness, or maybe to the fact that few people liked it as kids, or that the Southern preparation involves cooking the hell out of it with bacon, thus transforming this vegetable into a heart attack on a plate.

That said, it's also one of my very favorite single ingredients to cook, especially deep in the heart of winter.  Alright, I live in LA, so the heart of winter most likely only involves a paltry amount of rainfall, but you get the point.  It's a hearty winter green, after all.  I love serving kale as a side dish, or adding to pastas, or serving it under fish and meat.  It's great raw in salads, too.  It cooks up quickly and has unsurpassed health benefits.  Rarely a week goes by that I don't have kale in my fridge.

So it should come as no surprise that when my monthly book club rolled around last week and I perused my fridge for what to bring, my eyes fell on a big bag of organic baby kale I'd bought at the Hollywood Farmers Market earlier that week.

"Hmm... I wonder if people will eat kale," I pondered to myself.

I pictured the book club girls eying it nervously, before gingerly placing a single leaf on their plates.  Even worse, I wondered if it might actually be considered insulting to show up to my friend's house with a big bowl of cooked leaves, when everyone else was toting bottles of wine and big bags of cookies. I even worried that I'd be thought of as the weird kale girl from then on.

I took a deep breath to shore up my nerves, grabbed the bag of kale from my fridge and vowed to make a batch of the stuff so delectable, so mouthwateringly amazeballs (without cheating by adding bacon or guanciale), that even the most greens-a-phobic eater would discover their deep-rooted love for kale. As I've often stated, I believe that a lot of people's food aversions (not allergies) exist because they've never had the product prepared properly.  And kale is one of those things that can go really wrong, or really right.

So what happened at my book club?

It went really right!  To prepare the kale, I'd sauteed it first with garlic and chili flakes, and then finished it with lemon juice.  For crunch and richness, I added toasted pine nuts, and for little bursts of sweetness, currants.  I'd theorized that the texture and slightly bitter, caramelized flavor of the sauteed kale would contrast beautifully with the currants.  Yup, it did.

And then something happened that night that had never happened in the history of kale.  People were fighting over the last leaves left in the bowl!  I even forked some of my portion to another kale-hungry girl (I'd taken a lot, but only because I figured I'd be the only one chowing down).  One of my book club girls who is self-admittedly not a veggie fan even got seconds!  It was like the whole world had turned upside down.  Kale was suddenly the star of the evening, like the ugly duckling who turned into a swan.

By the end of the night, my heart felt all warm and fuzzy.  You see, it's easy to make macaroni and cheese, or steak, or anything cooked in butter taste delicious.  What's really challenging is working with a difficult product and transforming it into a dish people love.  I figure that's why the French prize their offal (organ meats) so highly!

Not that I'll be serving calf brains at my next book club, though I do have this fabulous Mario Batali recipe... 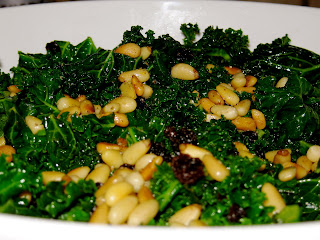 A few additional notes on kale:

I can't finish this column without extolling on its health benefits, so here it goes. Kale contains powerful antioxidants, and thus has anti-inflammatory properties.  It's also a rich source of beta carotene, vitamin K, vitamin, lutein, zeaxanthin and calcium, which is especially important for women. Kale, like broccoli and other members of the brassica family, contains sulforaphane, a chemical believed to have potent anti-cancer abilities, which is strongest when the leaves are eaten raw.

When cooking kale, or anything for that matter, make sure to season it properly!  Just properly salting and peppering a dish can take it from lackluster to revelatory.  Taste everything before you serve, and adjust seasoning as necessary.

Directions
Heat the olive oil in a saute pan over medium high heat.  Add the garlic and chili flakes and saute for one minute.

To serve, remove the kale to a serving bowl.  Top with the currants and pine nuts.  Enjoy! 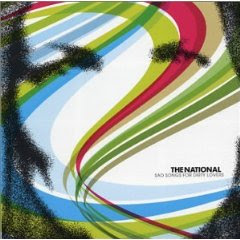 An indie-rock band from Cincinnati, Ohio, this is the album that first put them on the map.  It was released back in 2003, but I just picked up a copy this week and absolutely love it! I also adore 20005's Alligator and 2007's The Boxer, which many music publications picked as one of the best albums of the year.

Posted by Jennifer Brody at 9:18 AM