If there's one thing that the L.A. dining scene is lacking it's good Pho, a Vietnamese soup usually made with chicken or beef. The soup includes noodles made of rice and is often served with bean sprouts, basil, lime, bean sprouts, and peppers that are added by the diner.

We're overrun with sushi joints, K-Town BBQ's, Thai shops, and Taco stands, but Vietnamese restaurants are far and few between. There's even been a ramen resurgence in greater Los Angeles of late (read about my addiction to Jinya Ramen). 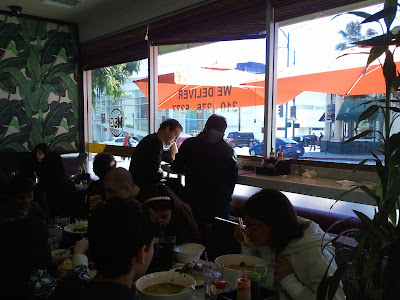 Last weekend, while I was racing around Beverly Hills running errands and famished, I stumbled upon 9021Pho, the cleverly named brainchild of Chef Kimmy Tang, formerly of Michelia, which used to be on of my favorite lunch spots. Starving and freezing (it would later snow in L.A. that afternoon), I decided that a big, hearty bowl of Pho was just what the doctor ordered. 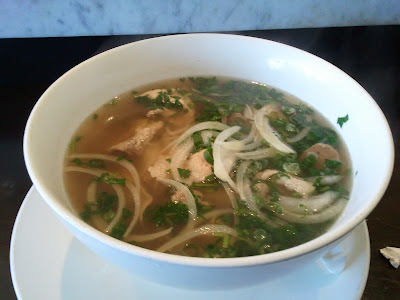 I sat behind the lunch counter and scanned the options, which included beef, chicken, tuna, and vegetarian versions. The menu also showcased a variety of other Vietnamese fusion cuisine, but my heart was stuck on Pho. I quickly decided on the Pho Bo, a traditional dish served with thinly sliced beef, beef balls, bean sprouts, basil and chili, served with noodles in a traditional Vietnamese beef broth.

A few minutes later, my soup emerged from the kitchen in a huge white bowl. It was piping hot and aromatic. I dug in without pretense. The broth was rich and clean tasting, with accents of chili and cilantro. The rice noodles were slippery and tender, and perfect with the thinly sliced beef. The beef balls were studded with rich pieces of beef fat, decadent and delicious. At less than $10 a pop, this was a bargain basement lunch in Beverly Hills. 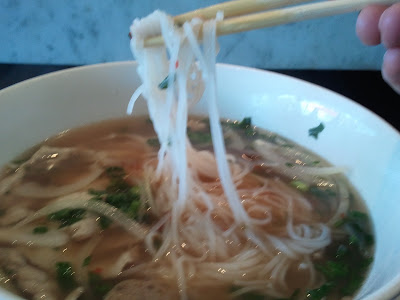 I ate as much of the soup as I could possibly get down, and then wished in vain that my stomach were larger to accommodate all of the broth. Next time I'm in Beverly Hills, you'll know where to find me--with a big bowl of Pho!