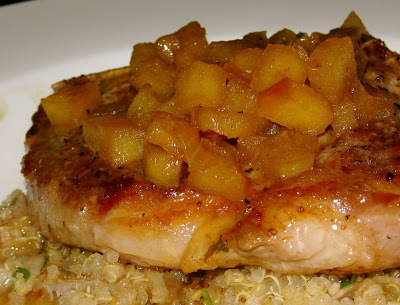 Today is a bonus day - you're getting two recipes for the price of  one!

I made this dinner last weekend, and wow, did it turn out fabulous!  I used fresh-pressed apple juice that I made with my Omega Juicer to make my sauce, which really added great flavor. I served the Apple-Glazed pork over quinoa, studded with smokey La Quercia pancetta and toasted walnuts, which really gave the dish a great nutty, earthy component. For wine, we paired this dinner with the stellar 2007 Tablas Creek En Gobelet (CLICK HERE FOR ARTICLE), which may be the best wine I've had all year long.  It complimented the dish, and then some, making this one of the best meals I've made this fall. 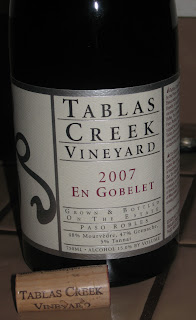 Now onto more important matters before I share my recipes!  The Adorable Monster, who has been confined to the house for two weeks following his ball removal, is going back to the dog park today!  I know as soon as I utter the two words, "Dog Park!" that he'll leap with fanatical joy and throw himself at the door.  He'll also probably whine in my ear the whole way there, and then run around like a maniac once we arrive, sniffing other dogs' booties and peeing on everything in sight.  I'll report back on how it goes!

If you're curious what I'm cooking, tonight I'm making a chickpea and organic vegetable vindaloo, and tomorrow, a decadent risotto made with pancetta, red wine and radicchio (a recipe from Jamie Oliver, who makes amazing risottos is you ask me).  Next week, I'll be posting more great recipes, wine reviews and more!  So keep reading and cooking!

To make the quinoa, place the olive oil in a pot and heat over medium-high heat.  Then, add the pancetta and saute until crispy and beginning to brown, about 5 minutes.  Add the shallot and cook for a few more minutes, until softened and translucent.   Add the quinoa, stir to combine, and cook for one minute.  Add the water, bring to a boil, then reduce heat to low and cover.  Cook for approximately 15 minutes or until all the water has been absorbed.  Then remove from heat and allow to rest for 10 minutes.

Meanwhile, spread the walnuts in an even layer in a pie pan or other oven proof dish.  Toast in the oven until golden, about 4 minutes.  Remove from the oven, allow to cool and chop.

Once the quinoa has rested, stir in the parsley and walnuts, fluffing as you combine.  Season to taste with salt and pepper. 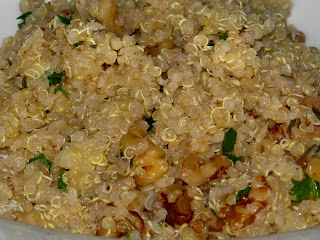 To make the pork chops, salt and pepper the pork on both sides.  In a saute pan, heat the grapeseed or canola oil over medium high heat until almost smoking.  Add the pork chops to the pan and cook for a few minutes on each side, until golden brown and cooked through.  Remove and set aside to rest. 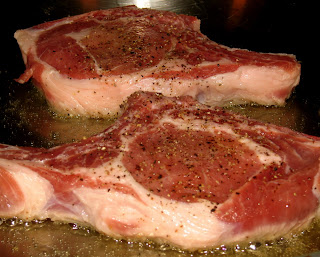 To make the apple glaze, add the shallot to the same pan where the pork chop was cooked.  Saute for two minutes.  Add the apple and cook, stirring occasionally, until softened and beginning to brown.  Add the apple juice, the thyme sprigs and sherry vinegar.  Bring to a simmer and cook until reduced by two-thirds (it should begin to take on a nice, slightly thicker consistency).  Once it's reduced, remove the thyme sprigs and season to taste with salt & pepper. 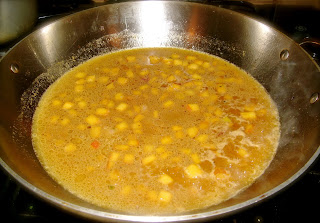 organic thyme from Hollywood Farmers Market
Posted by Jennifer Brody at 11:57 AM