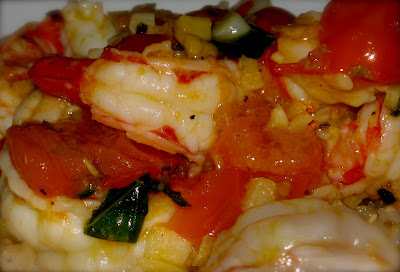 While he's slaving away at work today, we had a very nice celebration at home on Saturday night.  I gifted him with a very special and unusual bottle of pinot noir (2006 Chacra, Cincuenta y Cinco, Argentina) and cooked him an epic dinner of my own creation (Organic Bone-In Extra Large Pork Chops with Homemade Butternut Squash Ravioli & Apple/Bacon Slaw).  I promise to share this divine recipe in the upcoming weeks!  Trust me, it's a fabulous fall dish.

In the meantime, I thought I'd bring you another installment in my "Simple Suppers" series, this time featuring my version of shrimp scampi.  The beauty of shrimp is that they're a great source of protein and low in saturated fat. While they are known to be high in cholesterol, in a study published by the American Journal of Clinical Nutrition, the increase in LDL (bad cholesterol) was lower than the increase in HDL (good cholesterol), resulting in no significant alteration of total cholesterol.  Also, they're rich in vitamin B12, omega-3 fatty acids and selenium (has been found to decrease cancer incidence).

Even better?  For all you busy working divas out there, shrimp cook up in a literal flash!  That's why this is a perfect "Simple Suppers" recipe. 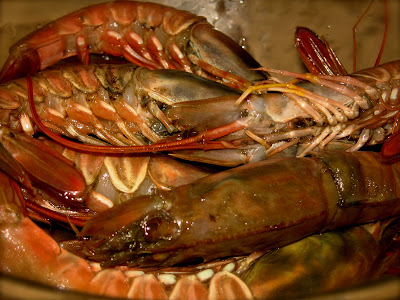 Local Black Shrimp
For this recipe I used local Black Shrimp purchased from John Wilson, Captain and Owner of the Sea Fever, which he uses to fish off the Santa Barbara coast.  While he specializes in live crab and lobster in season which he sells at local farmers markets, a few weekends ago, he happened to have a nice supple of Black Shrimp on hand that he'd recently caught.  After spying the lovely creatures in his booth, I happily took a pound off his hands.  They were beautiful and still coated in sand from the ocean.

I quickly squirreled them home, along with some organic Sun Gold cherry tomatoes and organic basil, and settled on my dish.  I'd be making my version of shrimp scampi, loaded with plenty of garlic and the cherry tomatoes, and served over a bed of organic short grain brown rice, studded with basil and lemon juice.

Not only was this dish a snap to throw together, it was heavenly on the palate!  John Wilson's shrimp were amazingly sweet and succulent, blending perfectly with the acid of the tomatoes and lemon and the aromatic basil.  A healthy, delicious meal that you must try for yourselves!

Note: While shrimp may be purchased fresh, like the shrimp featured in this recipe, I always keep a bag of raw frozen shrimp in my freezer.  They defrost quickly in cool water and cook up super fast, for a great dinner in a pinch.  I highly recommend keeping them on hand.

Another great tip for culinary superheroes?  Buy shrimp with the shells on, which can be saved and transformed into shrimp stock for use in dishes like fish stews & shrimp etouffee (click here for my recipe). 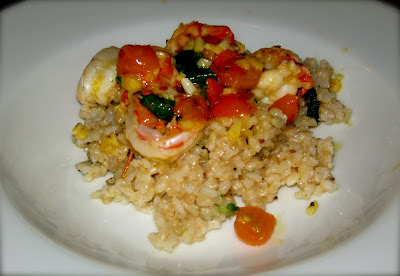 To make the rice, stir in 1 tbsp lemon juice and 2 tbsp basil.  Then, season the rice to taste with salt and pepper.  Set aside while you prepare the shrimp. 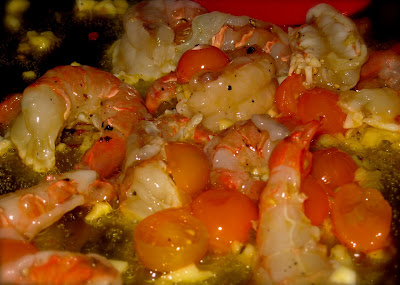 To plate, place some of the rice on a plate and top with a generous portion of the shrimp and pan juices.  Toss a little chopped basil on top.  Enjoy!

Specializing in live lobster and crabs that he catches off the Santa Barbara coast, John can be found at the Hollywood Farmers Market selling his catches.  He also usually sells a variety of fish and other seafood, like the Black Shrimp I used for this recipe! 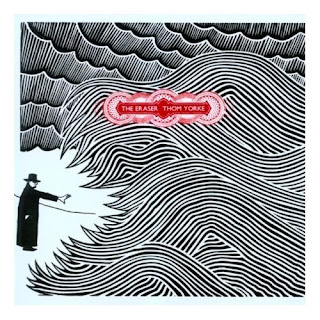 Last night, I was one of the lucky few fortunate enough to catch one of those special concerts that happen in Los Angeles sometimes, where great artists come together to create magic on stage!  I'm speaking about Thom Yorke's surprise concert last night at the Orpheum, a small 3000 person venue in downtown Los Angeles, where he teamed up with Flea (bassist - Red Hot Chili Peppers), Nigel Godrich (producer - Beck, Radiohead), Joey Waronker (drummer - REM, Beck) and Mauro Refosco (crazy percussionist dude).
Wow is about all I can say!  They took the stage right at 9pm and dove into material straight off of Thom Yorke's solo album, The Eraser, with Flea dancing up a mad storm on stage while Yorke played piano or alternately electric guitar.  Not only did the musicians all blend together seamlessly, but you could really hear Flea's bass, a huge asset that added a nice kick of funk to the dance-driven material.  After a few songs, Yorke even implored the audience to get off their butts like they were in a "cinema" and groove to his music, an order with which everyone happily complied.

After an hour, the band left the stage, and Yorke returned solo to play a few new songs.  Clutching a guitar, he introduced the next song, an unnamed track that possibly may end up being called "Lotus Flower."  He then promised he'd be working on this track with Radiohead before launching into the incredible song!  Seriously, I can't wait to hear the finished version.  He then played one more new song on the piano, which also seemed like possible new Radiohead material, followed by the Radiohead rarity "Super Collider."  Then, the whole band took the stage again to close out the show with two upbeat numbers.

As I left the venue after first picking up my limited edition Thom Yorke album featuring two new tracks recorded with the new band, I realized I'd just seen something incredible happen - the convergence of incredible musical talent!  For those of you lucky enough to attend, they're playing again tonight at the Orpheum, and they played on Friday night at the Echoplex.  Thom Yorke has also been playing surprise DJ sets at the Roosevelt Hotel, making the most of his time in Los Angeles.  I can only hope he decides to visit more often!

TO VISIT RADIOHEAD'S HOMEPAGE, WHERE THE SHOWS WERE FIRST ANNOUNCED, CLICK HERE!

Special thanks to David B., my fellow NIN compadre, for tipping me off to this great show!!!
Posted by Jennifer Brody at 12:36 PM