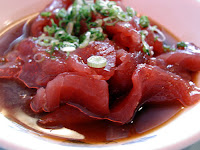 In a city known for its sushi restaurants, there is one such joint that stands apart: Sushi Nozawa. Located in an unassuming strip mall in Studio City, I'd heard infamous stories about it since I first arrived in Los Angeles years ago. In describing the temperamental Chef Nozawa to me, people regularly invoked the Soup Nazi from Seinfeld, calling him the Sushi Nazi. Rumor even had it that some clueless bloke had been ejected from the restaurant for the grievous offense of ordering a California Roll. Oh, how terrible! My friends cautioned me to be on my best behavior if I ever ventured to this jewel in the valley. Don't order anything. Speak only if spoken to. Eat whatever he gives you. In one bit only no less. Apply soy sauce only to the items the chef OKs. And then, only to the top of the fish. It sounded like I needed a class in etiquette as much as in Japanese food to survive dining there!

Today, having finally finished a working draft of my novel, a process that took the better part of a year, I decided to lunch in celebration at Sushi Nozawa, hoping I'd fare better than the hapless California Roll ordering guy. My first impression was that if you weren't looking for Sushi Nozawa, you'd never notice it. Nestled into a strip mall, and among countless cheap Thai and Indian restaurants, it doesn't look like anything special from the outside, but don't be fooled. As we're often taught in grade school, it's what's on the inside that counts.

When I entered the quiet space, a demure waiter asked if I wanted a table or the sushi bar. Bravely, I requested the bar, hoping to come face to face with the Sushi Nazi himself. "Only omakase at the bar," the waiter cautioned. "You have to eat whatever he gives you." Wondering if they always issue parental guidance warnings to their guests, or if I just looked especially clueless, I responded confidently, "No problem! I promise to eat anything."

Having passed the test, the waiter allowed me to choose any seat. I took a seat at the end of the bar, coming face to face with the Sushi Nazi himself. My first impression was that he seemed serious. Very serious. Behind him, a sign read: "Today's Special: Trust Me." Next to me, a few men dined, appearing to be on business lunches. I noticed right away that they threw compliments at Chef Nozawa, as if hoping that would keep the food coming and the Nazi himself at bay.

Immediately, my first course was placed in front of me. "Baby tuna," the Nazi huffed, sliding a small, white plate filled with delicate slices of tuna in a ponzu sauce topped with sliced scallions. Sampling my first bite, I understood all at once why people raved about this place. The baby tuna was rich and smooth and the ponzu tasted fresh and perfectly accentuated the delicate flavors of the fish. This dish was at its best when I mixed the tuna into the ponze, slowly savoring each bite.

As soon as I finished my plate, my next course appeared in front of me. "Yellowtail," he said gruffly, sliding another white place with two pieces of light-colored sushi. This was my first big culinary challenge. All around me on the walls, signs warned me to, "Eat in one bite." The issue being that among my many genetic gifts is a small mouth. I've always struggled to fit sushi into my jaw whole. Fearing that I might commit a terrible dining faux pas, I maneuvered my chopsticks, gripped the fish, attempted to dip the top into the soy sauce (much harder than it looks!), and shoved the whole piece in my mouth. The resulting taste was inspired! The buttery yellowtail combined with the warm, lightly vinegared, loosely packed rice dissolved into my mouth. It was undoubtedly the best yellowtail sushi I'd ever had. And even though I'd dropped some rice along the way, nobody threatened to evict me. At least not yet.

Quickly, more courses followed. Next up was albacore. Now, I've often had this fish, normally seared, in sushi bars all over this city, but it had never tasted like this before. This albacore, coated in ponzu and topped with scallions, was baby soft and melted in my mouth. An inspired dish! Following that, the Sushi Nazi handed me a crab hand roll, one of his most famous concoctions. Delicately wrapped in sea weed, and layered with rich, meaty crab and rice, this dish is one that you want to go on forever. I nibbled at mine slowly, not wanting the ride to end. Next to me, the two gentleman finished their courses, and the Sushi Nazi asked if they wanted more. One gentleman responded, "One more roll. Anything you like." Spoken like a true Nozawa diner eager to maintain his place at the bar. The chef handed him a second crab hand roll. I guess if it ain't broken, don't fix it!

For my last course, I was given another small plate with two sushi pieces sitting on top of it. "Halibut," the Sushi Nazi told me. "Excellent!" I responded enthusiastically. Popping this fish into my mouth was like ingesting a firecracker. Coated in Japanese pepper and Yuzu sauce, the spice hits the palate immediately, but is balanced beautifully with the fish and the citrus in the sauce.

My stomach full and my palate dancing, I leaned back in my seat and patted my full belly. "Anything else?" the Sushi Nazi asked me. "No," I responded carefully. "That was perfect." And I meant it.

While the waiter hustled to get my bill ($36 for omakase and a small sapporo), I reflected on the sparse space and simply complex food. Here, there were no magic tricks, no fancy plates, no souped up presentations. In short, there was nothing for the food to hide behind. But this food needed no top hat, no velvet curtain, no slight of hand, it entertained all on its own!

Coming Soon! Check back in with me next week when I review The Bazaar by Jose Andres. This new restaurant features molecular gastronomy (my favorite style of food) by the famous Spanish chef. I've ventured far and wide in search of this food, Alinea in Chicago, WD-50 in New York and Coi in San Francisco being stand out places, so I'm excited to see how it measures up! Part magic act, part culinary amusement park, The Los Angeles Times recently gave it a rare four stars.
Posted by Jennifer Brody at 1:10 PM