The Diva Visits 2 Wine Bars in 1 Week! Reviews of Lou and Palate! 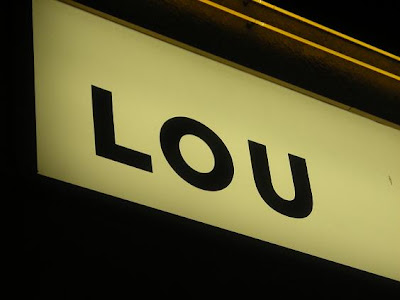 So much has been happening in Diva Land that I have to take a minute to share! In the last week, I've hit up both Palate in Glendale and Lou on Vine, two of the best wine bars in LA if you ask me.

Now, I'm a regular at Lou, loving their farmer's market menu, oddball wines and cheese. Last night, I ventured out to Lou, bringing my fellow lover of all things food, Sara S., for her first taste of one of my favorite spots. Located in a nondescript strip mall next to a laundromat and marked only by a simple sign that says, "Lou," it's a great place that feels off the beaten path. I love Lou for the modern decor (one day I must have that tree wallpaper somewhere in my house), focus on fresh, simple ingredients and of course the wine. The owner, Lou, can often be found behind the bar pouring wine, and last night was no exeception.

We feasted on a farmer's market salad, pig candy (bacon soaked in maple syrup), fava bean soup, their artinsanal cheese and charcuterie board, and last but not least, strawberry shortcake. Everything tasted divine, with extra points going to the pig candy, cheese (a creamy cows milk, raw goat milk and aged cheddar), the salumi (courtesy of Mario Batali's father), and the shortcake (nicely salted and not too sweet). On the wine front, we began with a lovely sparkling rose and then tasted a variety of wines, focused mainly on French and Italian varietals. When Sara and I get going, we can talk literally for hours on end, and last night we ran a conversation marathon. We closed out the restaurant and then continued our conversation on the street corner. Poor Kuzak was wondering what had happened to me! 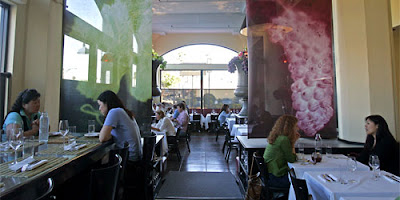 Last week, another divalicious gal pal who also specializes as a wine broker took me to Palate for the first time. Driving through Glendale's automall right before spotting the restaurant, my first impression was that it was an unusal location for such an establishment, and like Lou, it feels off the beaten path. I entered through the front doors, bypassed the main restaurant and headed to the back bar, a lovely space that felt cave-like and featured barrels and a horseshoe shaped bar. Sidling up to it, a French bartender scooted over and took our drink orders. While we waited for wine to materialize, my friend told me that she stores her wines that she reps at Palate, hence her love affair with the place. Settling into a night of French heavy wines interspersed with a visit to the cheese room and then the eating of the cheese. When we ordered our cheese selection, the bartender direly informed us that he was out the Epoisse like it was the most terrible occurrence to have befallen him in weeks. Instead he pointed us toward a fabulous brie, "not like those supermarket bries," as he pointed out.

On the wine front, I began with a Burgundy, then moved into a Cote Du Rhone, a Boredaux and finished with a Chateauneuf Du Pape, my favorite wine of the night hands down. My friend attempted to order a California Syrah, but the waiter denied her. "You don't want that," he said very seriously, instead poring her a Cote-Rotie. Ah, the French, how do I love them! Still craving more cheese, we ordered some of their aged cheddar and chowed down. As I left the bar to head home, I reflected that the wines I tasted that night were the best I'd had poured by the glass (and not coming out of Kuzak's cellar). I must confess that I have an abiding love for French wine, mostly for its unapologetic complexity that's both challenging and satisfying all at the same time, and also lacking in many other wines.

I'd highly recommend checking out both Lou and Palate! I know I'll be back at both establishments often. In fact, I'm already trying to figure out the next time I can sneak off to Palate!

Also, starting tonight, I'm hosting both Kuzak's parents and then next week my parents and my Top Chef Brother in LA, and boy do we have some dining planned. Among the choice establishments, I'll be dining and blogging on:

Diva Rating: 4 stars (out of 5 stars), especially for wine