As I worked with it, this dish took on a life of its own, and is hands down the best mussels recipe that I've ever cooked. First, I sauteed shallots in Kelapo organic coconut oil to add as much rich coconut character to the dish as possible. The aroma that immediately filled my kitchen was intoxicating. Then, I added a ton of ginger, lime zest, and chili flakes to the pan. Even more aroma arose from the pan. 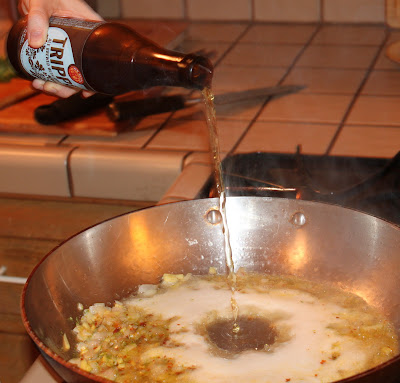 Next, a half a bottle of Trippel ale went in, foaming and reducing. It was time to add the black mussels. I steamed them until they were just beginning to open, and then stirred in coconut milk and seasoned the broth with salt and pepper. Once the mussels were cooked, I garnished them with julienned basil and served them right away, with  bottles of Trippel ale and crusty French bread to soak up the sauce.

From the first sip and bite, it was clear that the pairing was a success. The beer, while strong, had complex spice and character that held up under the strong Thai flavors of the mussels. They complimented each other beautifully. The mussels were fresh and flavorful, but the sauce was the true star. The beer, coconut, and Thai aromatics blended together into an amazing nectar.

I'll be making this dish again very shortly. It's my favorite recipe of recent times... 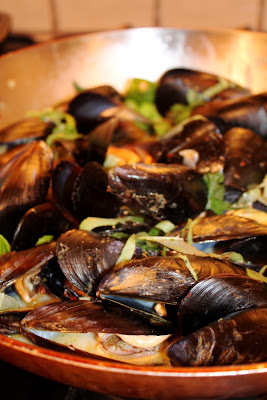 Disclaimer: This recipe was created as part of the Foodbuzz Tastemaker program in partnership with New Belgium Brewing Company. Compensation was received to pay for some ingredients, and Kelapo provided samples of their coconut oil.
Posted by Jennifer Brody at 4:00 AM