Sodexo's Meatless Monday initiative has launched nationwide, by promoting and adding the option of a plant-based entrée to its menus each week. Sodexo expanded the initiative to its more than 900 hospital client accounts across the country in January 2011, following successful pilot implementations at a number of hospitals, schools and colleges. The program has also been made available to Sodexo’s corporate and government accounts. 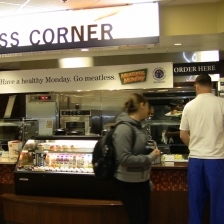 “Once people realize that vegetarian meals provide the protein that they need and are just as interesting, flavorful – and fun to prepare – people find them easy to integrate into their lives,” said Shawn Fields, executive chef, Cobblestone Café, Johns Hopkins Hospital. In addition to the many meals containing meat, Chef Fields has been providing the Meatless Monday options to his 1,800 customers a day since April, 2010. “Meatless Monday is based on the Healthy People 2010 report’s recommendation for Americans to reduce their saturated fat intake by 15 percent,” says Dr. Robert S. Lawrence, director, Johns Hopkins Center for a Livable Future. “Almost all of our saturated fat comes from meat and high-fat dairy. Cutting meat out one day week can help Americans reach the reduction goal with little effort.”

“Sodexo is proud to combine our culinary expertise with the knowledge of our clinical dietitians to integrate meatless meal options that meet the nutritional needs of students learning in schools, patients recovering in hospitals, and employees engaging worksite wellness programs,” concludes Nitu Gupta, vice president of brand management for Sodexo health care. “Meatless Monday provides a healthy and tasty alternative for people looking to implement a healthy diet change, which explains why it has been so popular.”
Posted by Jennifer Brody at 11:24 AM