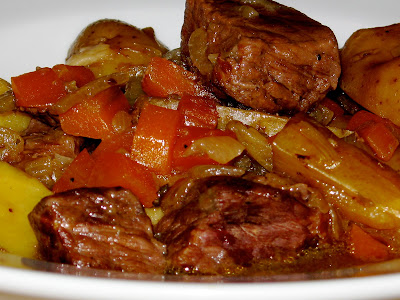 You didn't read it wrong--I love eating bison!  Not only is is a nutritionally dense, protein rich meat, but it tastes amazing, almost like a meatier, richer beef.

I know what you're probably thinking:  "Where the heck do I buy bison?"

Many grocery stores now carry bison meat, but I actually buy mine from Lindner Bison at the Hollywood Farmers Market.  They a family owned operation that raises their animals on grass (so it's rich in Omega-3's) and without the use of antibiotics, hormones or feedlots.  Click here to visit their website!

For this recipe, I slowly braise bison stew meat for two to three hours into a tender, rich stew loaded with onion, carrot, celery, garlic and potatoes.  It's simple--once you throw it in the oven, just let it cook until the meat is superbly tender.  It makes a great, healthy meal, especially when paired with a green vegetable or salad.

So give it a shot--I promise you'll be eating bison regularly in no time.

Short on time?  This recipe would also works for a slow-cooker (Crock Pot).

Directions
Preheat the oven to 325 degrees.

In a braising pan, add the grapeseed or canola oil over medium high heat. Then, add the onion, carrots and celery, cooking until lightly caramelized (about 10 minutes).  Add the bison, stirring it around until browned, about 3 minutes.

Next, add the red wine and reduce it over high heat until reduced in half, about 4 minutes.  Once it's reduced, add the garlic, potatoes, beef broth, bay leaf and cardamon.  Note that the broth should cover the ingredients.

Cover and place in the oven, braising for about two to three hours, or until the beef is tender. Season to taste with salt and pepper. Enjoy!

Wine Pairing
With this rich dish, we drank the rest of the Anthill Farms 2007 Cabernet Sauvignon, Timber Crest Farms, Dry Creek Valley.  Not only did this wine drink better on the second night, but it complimented the bison stew perfectly.

To read more about this wine, check out my tasting notes under this recipe.
Posted by Jennifer Brody at 10:15 AM