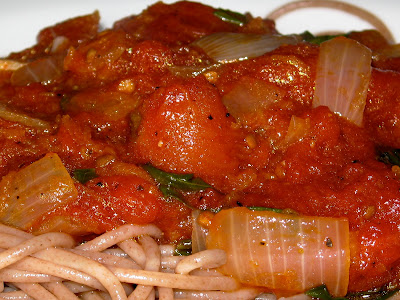 Sometimes the simplest things are the best.

On Friday night, the A-Girl came over for a hike with the Adorable Monster followed by dinner.  While I've been known on occasion to attempt challenging recipes, more often than not, I prepare simple meals.

The ingredients, of course.  In fact, this is just about every chef's trick.  It's from where we draw our inspiration, and it's a large part of the reason why the food in top restaurants tastes so flipping amazing.

For our dinner, I made a classic marinara sauce, an Italian red sauce usually made with tomatoes, garlic, onions, herbs and spices, which I served over a whole grain spaghetti.  I added a healthy portion of fresh organic basil, a highly fragrant leafy herb which gained popularity as the main ingredient in pesto and showcases a variety of awesome health benefits, like protecting cells from free radical damage and aiding in the immune system by inhibiting the growth of bacteria.  This turned out to be the perfect post-Runyon hike meal - a hearty pasta dish accompanied by my famous Roast Cauliflower which I topped with dried cherries, parsley and pine nuts.   Everyone loved it, and the Adorable Monster only tried to hump the A-Girl, who he must consider his girlfriend, one time. 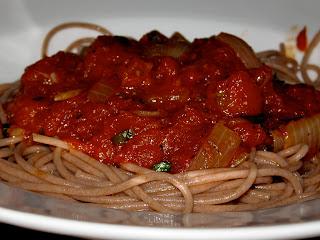 Directions
To make the marinara sauce, heat the olive oil over medium heat.  Add the onion and garlic and cook until softened (8-10 minutes).  Add the thyme and carrot and cook for 5 minutes, until carrot is very soft.  Crush the tomatoes with your hands (I love this part!) and add them and their juices.  Add the bay leaf.  Bring to a boil, stirring often, and then lower the heat and simmer for 20 minutes.  Add the thyme, oregano and basil and simmer for 10 more minutes.  Season with salt and pepper.  This sauce keeps for 1 week in the fridge and 6 months in the freezer.

Meanwhile, bring a pot of salted water to a boil.  Add the whole grain spaghetti and cook for about 8 minutes, or until al dente.  Do not overcook.  Drain and rinse with water and toss with a little olive oil to prevent sticking.

To plate, place some pasta in a wide-bottomed bowl and smother with a generous portion of marinara sauce.  Top with a little fresh grated parmesan reggiano.  Enjoy! 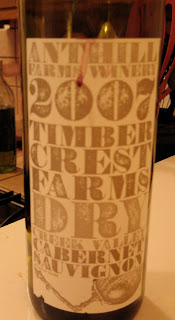 Wine Pairing
We started with a bottle of Copain 2006 Syrah (Robert Parker 95-97 points) from the James Berry Vineyard.  We'd recently tasted the Saxum 2006 James Berry Vineyard, Proprietary Blend (Parker 95 points) and wanted to compare the two wines.  I must admit that we slightly preferred the Copain, at least at this early stage.  But they're both fabulous wines - big boys with an inky-black color and super concentrated fruit.  I'll be interested to taste them both again down the road once they get some age under their belts.  You know we'll be drinking them...

Then, we followed it up with a Cabernet Sauvignon from Anthill Farms.  While we've imbibed copious amounts of Anthill Farms Pinot Noir, for which they're known, we'd never tasted their Cabernet Sauvignon, in part because they just made it for the first time.  So on this night, we popped a bottle of their 2007 Cabernet Sauvignon, Timber Crest Farms, Dry Creek Valley.  It drank great for the first fifteen minutes, but then faded.  We capped it and let it rest until the following night, when we re-tasted it.  I enjoyed it much more on the second day - it mellowed, and some of its mustiness faded, allowing more of the fruit to shine.  I was reminded once again that wine is such a temporal creature, always changing, morphing, elusive yet endearing, welcoming, yet challenging.

Posted by Jennifer Brody at 1:00 PM