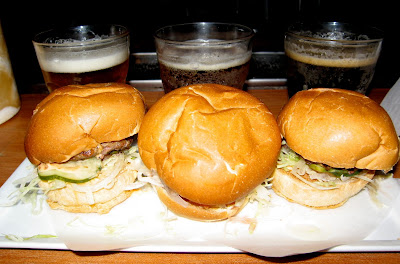 It's true that on occasion, I don't feel like cooking.

This usually happens after I've tackled one a challenging supper project.  This week, it was Roasted Rack Of Lamb (from Healthy Family Farms, CSA) with mint-shallot vinaigrette (organic mint from the farmers market) served over jumbo cannellini beans ("runner" heirloom variety) that had braised in homemade chicken stock for close to three hours, and then been simmered down with sauteed onion, carrot, celery and thyme.  Lamb, mint and white beans are a classic combination.

Umm... it was delicious.  Not to pat myself on the back (alright, I am actually), but I cooked the grass-fed lamb to perfection.

Fatigued from undertaking that meal and lacking inspiration, I declared to Kuzak, "We're going out tonight!"  Oh, and I'd had an elaborate dream the night before about getting a cheeseburger (it's a long story), so I decided this would be a great chance to try Chef Govind Armstrong's 8oz Burger Bar.

Like his last Los Angeles establishment, Table 8, which I loved, this one is tucked away on Melrose Avenue by Fairfax.  And it has his famed Short Rib Grilled Cheese on the menu (thank god, because when Table 8 closed I mourned the death of this sandwich like it had been my blood relative).  But the similarities end there.  The menu screams comfort food on every level--I drooled just reading it.  Not only where there "Mini Kobe Corndogs," but also an entire milkshake menu. 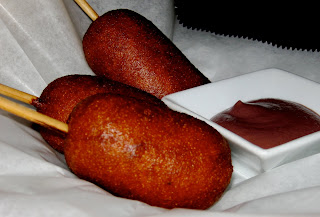 And I haven't even gotten to the burgers.  They have the signature 8oz and a slew of other concoctions or you can make your own from their dizzying list of accompaniments (sunflower sprouts anyone?).  And for you vegetarians, they do have a "Veggie burger," and pescatarians, a "Fillet Of Fish."  Wow, they really did think of everything!  They also have a beer menu, nothing to rival Father's Office of course (as Kuzak pointed out), but a nice menu nonetheless.

When I arrived, I decided to sit at the bar.  After all, it was advertised as a "Burger Bar," after all.  The bar was comfortable, situated in front of the milkshake station and panini press used to make the Short Rib Grilled Cheese, with a flat screen television playing the Lakers game and a good view of the kitchen.  Kuzak was running late from work, so I ordered for us, choosing the Mini Kobe Corndogs, the Suds And Slider Sampler (three sliders paired with three draft beers), the signature 8oz burger with Bel Paese cheese (a melty, provolone-like cheese), the Truffled Potato Skins and the Roasted Baby Broccoli (we needed something green, right?).  The bartender gave me a curious look.

"Are you going to eat that all by yourself?" he asked worriedly.

I reassured him that my boyfriend would join me shortly to aid in the chowing down. 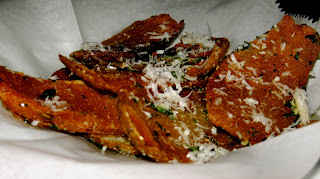 Even though the bar was packed, the food came out within fifteen minutes, and all at once.  It really was a feast!  We started with the corndogs, which came with a spicy wine mustard.  They were delicious, everything you want a corndog to be, meaty, salty, crispy on the outside, tender on the inside.  We were off to a good start!  Next, we nibbled the Truffled Potato Skins, which appeared to have been deep fried and topped with parmesan.  Usually, I don't love truffle oil, but here it worked beautifully, not overpowering the skins.  And who doesn't love deep fried potato of any kind?  These got eaten quickly.

Now it was officially burger time.  We started with the Suds And Slider Sampler, which came with three types of sliders--wild boar, triple prime beef and Niman Ranch lamb--each paired with a small glass of beer.  I know we should have gone from lightest to heaviest, but I couldn't resist the allure of wild boar.  I halved it and Kuzak and I both took a bit.  It had a distinct boar-ish flavor, gamier than beef, but delicious.  All the accompaniments on the burger were both classic, calling to mind the original drive-through, but also top notch.  The buns, which were pillowy and soft, not cakey, and the pickles, briny and sweet, were my favorite parts besides the meat.  We quickly ate the other two sliders.  If I had to choose, the triple prime beef was probably my favorite, though they were all worth trying! 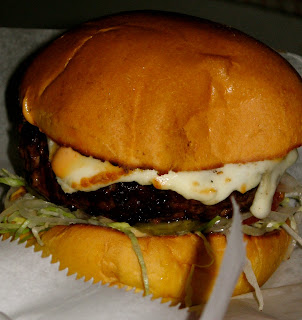 Now it was time to take on the big boy--the 8oz.  While many of the other burgers had looked tempting, it was my first visit to the restaurant and I felt I had to cover my bases.  Kuzak and I split the burger, and when I cut into it, I saw that it had been cooked to perfection (meaning medium rare).  The meat was rich, flavorful and tender, and the classic iceberg, tomato, pickle, white onion and special sauce combo worked perfectly.  There's a reason why burgers have been made this way for years and a whole industry is based on them.  The saying, "If it ain't broke, don't fix it," springs to mind.  This was a perfect burger, and the best I've had in Los Angeles to date.

The only thing left was the baby broccoli staring us down, saying "Eat me if you want to live!"  I confess I'd ordered it out of guilt, and while it was delicious and garlicky, it was the one thing I doggy bagged home.  Oh, well.  I plan to eat it with eggs for breakfast (waste not, want not). 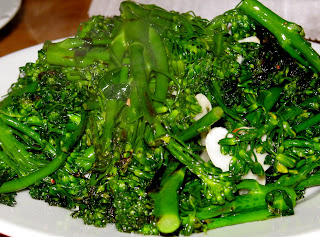 I also brought a tiny piece of burger meat home for the Adorable Monster.  It was his first taste of hamburger, and he did what he always does when he gets something new.  He dragged it out of his his dog bowl, plopped it down on the carpet and inspected it.  Tentatively, he took a first bite.  His tail wagged.  Then, he wolfed it down and promptly looked for more.

The 8oz Burger Bar is a winner in my book (and in the Adorable Monster's)--affordable, comfortable, delicious.  The only problem?  I didn't save room for ice cream!  But don't worry about me.  I'll venture back on a night when I need another break from cooking.