The Willy Wonka of Breakfast: Q&A with Jodi, Chef and Founder of The Griddle Cafe

Jodi Hortze, isn't just a self-trained chef and the founder of The Griddle Cafe -- she's the Willy Wonka of breakfast.

Her eatery cooks up her imaginative recipes like Baked Potato Omelette, Scotch on the Rocks Pancakes, and her signature dish, Red Velvet Pancakes, for which she just launched a make-at-home mix (available online and at Kitson boutiques).

Jodi's love of sweets stems from childhood deprivation. Growing up, she was not given sugary treats very often. As they say, neccesity is the mother of invention. Out of a combination of curiosity and desire, Jodi began whipping up her own unique desserts.

In fact, while she was a teenager, she worked at Winchell's Donuts and Carvel Ice Cream, where she was famous for bringing in her own ingredients to mix with ice cream. Finally, the opportunity arrived for her to open The Griddle Cafe.

Q&A with Jodi, Founder of The Griddle Cafe

Domestic Divas: What inspired you to open a breakfast-centric restaurant?

Jodi: Growing up Willy Wonka and the Chocolate Factory was my favorite movie (actually, it still is). I loved the way the movie brought candy and chocolate to life, and that’s what I do with food. My mother was extremely limiting to the amount of sweets I could have, but she baked, and made pancakes and French toast occasionally... let’s just say that during these times nothing else could keep me away from watching.

My creating started early on, with something as simple as adding tons of sugar to corn flakes to make my own Frosted Flakes (with probably five times the amount of sugar regular frosted flakes has… that’s the irony of it), since my mom didn’t let me have sugar-type cereal. We sure did have sugar in the house, though, and I quickly learned what to do with it to make my own sweets at home while my mom worked.

The reason I chose to open a breakfast-centric restaurant is because it is my favorite meal of the day, and one of the first things I can remember making on my own (aside from my own over-sugared frosted-flakes) was French toast…I loved it!

Domestic Divas: Do you prefer savory or sweet for breakfast? Or both?

Jodi: I prefer both, but if I HAD to choose, sweets would win, hands down.

Domestic Divas: I read that you're a self-taught chef. How did you learn to cook?

Jodi: As I previously mentioned, I learned by watching my mom bake occasionally, but really it came down to it being part of who I am. There is a scene in Willy Wonka and the Chocolate Factory where a little boy asks the Candy Man how Mr. Wonka does what he does.  The Candy Man answers like this: "Do you ask a fish how it swims, a bird how it flies?!?  No siree, you don’t…they do it because they were born to do it!" 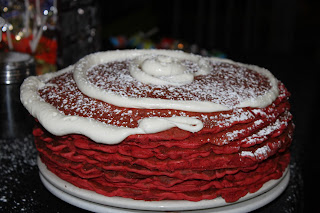 Domestic Divas: Among other things, you're famous for your pancake recipes. What inspired you to create Red Velvet Pancakes?

Jodi: I love to create all types of pancakes and such, and one night I was thinking about how much people love Red Velvet Cake/Cupcakes, so I thought, why not make a Red Velvet panCAKE. I knew it had to be out of this world, due to the fact that people who know and love RV Cake, REALLY LOVE RV cake.  It had to be the perfect blend between a RV Cake and a Buttermilk pancake, which it is. It actually worked out even better, since true RV cake has buttermilk in it.

I also created a Carrot Cake PANCAKE! I call it “Sweet Fantasy Baby” Carrot Cake PANCAKE. It is only available during certain days and time frames, and you can only be “in the know” if you follow me at twitter.com/thegriddlecafe.

Domestic Divas: You've just launched Red Velvet Pancake Mix. What made you decide to develop your signature recipe into a mix?

Jodi: People began emailing me from all over the world, either asking me for the recipe or if we could ship some to them. There is no other RV panCAKE mix in the world, and I wanted to be the first.  But more importantly than that, I wanted to give people a piece of The Griddle Café in their very own home… a journey through my imagination; a journey into the most delicious world of their very own.
Posted by Jennifer Brody at 11:20 AM