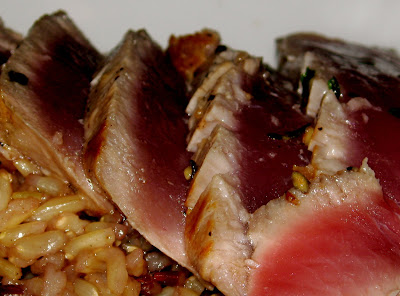 Happy Friday Divas!  Let me share with you what I've got planned!  It's only two words.

Today is dedicated entirely to the execution of a Charlie Trotter recipe I've been dying to try for Zinfandel Braised Short Ribs.  My mouth waters just typing those words.  The recipe heralds from his amazing cookbook, the one that changed my cooking and therefore my life, The Kitchen Sessions with Charlie Trotter.  Now, if you ask me, there's nothing in the world better than tender as hell, falling off the bone short ribs.  This recipe pairs the short ribs with roasted root vegetables (yukon gold potatoes & turnips), greens cooked in bacon and mustard spaetzle (something I've never cooked before).  But just reading those flavor profiles, I'm positive this recipe is going to be a winner.  The ribs have already marinaded for 36 hours in a concoction of a whole bottle of red wine mixed with caramelized apple, onion, leek & jalapeno and finished with thyme, sage and coriander seeds.

The decision to cook this recipe this week was precipitated by the availability of Lindner Bison Short Ribs at the farmers market this weekend.  I purchased the ribs directly from Kathy Lindner herself.  Her farm represents the kind of responsible, local agriculture that I most wish to support.  Lindner's bison are humanely raised, grassfed, and free of drugs and hormones. I couldn't be more excited to cook her meat!  Bison meat boasts a flavor similar to beef, but because it's grassfed, is leaner than typical short ribs (healthier) and bison typically has a richer and fuller flavor than beef.

In addition to his amazing recipes, Charlie Trotter's cookbook also offers great tips for wine pairings, and for this one, drinking a great California Zin is obviously the best choice.  Kuzak has a few potential suitors at his fingertips, including a Turley that must be drunk soon and a great Outpost Zin.

Luckily for me, and for the Adorable Monster, the A-Girl is coming over this evening to tackle Runyon and then feast on my short rib dinner, and undoubtedly endure an extensive leg humping session courtesy of the Monster.  In fact, we're considering changing his name to Sir Humps-A-Lot.  It has a nice ring to it.  Or, maybe, Humpy von Humpson.  Now who could resist humping and dinner on a Friday night?

I promise to report on how my Trotter experiment proceeds tonight, but in the meantime, I want to bring you another installment in my Simple Suppers series.  We're all always looking for quick, healthy meals to whip up after a long day at work, and this one is a cinch.  Ahi Tuna is delicious and so easy to cook, in part, because it doesn't even really need to be cooked, just seared which takes only a few minutes.  I paired the fish with a great whole grain wild rice blend.  Add a salad or steamed vegetable, and you have the perfect meal!

Note:  I don't recommend eating tuna every day due its higher mercury content, but once or twice a month, it's a great treat. 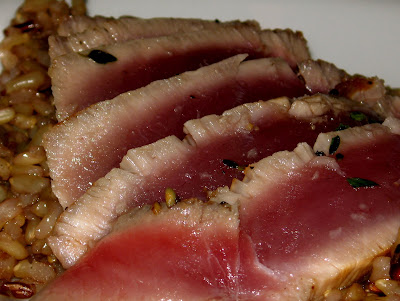 To make the rice by placing the rice, water, olive oil and bouillon in an uncovered pot and bringing it to a boil.  Cover and cook for approximately 40 minutes, or until all the water is absorbed and the rice is tender.  Remove from heat, and allow to sit for 10 minutes.

While the rice is cooking, whisk together the olive oil, lemon juice & thyme and season to taste with salt and pepper.  Give the tuna a quick marinade for about 20 minutes (can be left in marinade for longer).

In a hot saute pan, add the grapeseed oil.  Remove the tuna from marinade, sprinkle fillet with salt and pepper, and quickly sear, cooking on each side for only about a minute or two.  Remove from pan and allow to rest for a few minutes. Then, cut into thin slices, revealing the beautiful, raw middle.

To plate, pile some rice in the middle of the plate and then arrange the tuna slices on top.  Squeeze a little more lemon juice on top.  Enjoy!

Run by the husband and wife team of Kathy and Ken Lindner, Jr., they specialize in bison raised humanely and sustainably.  Their bison are grassfed, free of drugs and hormones.  Bison meat tastes similar to beef, but with what some describe as a fuller, richer flavor.  They can be found selling their grassfed bison at the Hollywood Farmers Market on Sunday.  CLICK HERE TO VISIT THEIR WEBSITE.

This is hands down my favorite cookbook.  At this point, my copy is stained, dog-eared, but still working its magic in my kitchen, just the way a good cookbook should be! This is the book that changed my cooking and, therefore, my life.  Working with his recipes, and his flavor profiles, one cannot help but be blown away by his culinary genius.  Like a jazz musician, he takes an improvisational approach to cooking, which allows flexibility in the kitchen to work with the best ingredients available.  Every Charlie Trotter recipe I've ever made has turned out nothing less than stellar.  Currently, in stock at Amazon.

Having established their hard-driving sound over there previous albums and countless live shows, one of my favorite metal bands brings it on their new album, a slickly produced studio effort that captures the ferocity of their live sound.  This album has been on heavy rotation in my car and at the gym (there's no better place to listen to metal).  One of the guitarist also happens to be a friend.  Check this album out if you get a chance!
Posted by Jennifer Brody at 11:21 AM