Divas, I'm still rocking out my Sous Vide Supreme, a sous vide machine for the home cook. It makes the best pork tenderloin on the planet Earth!

So last Sunday, the A-Girl, my frequent dining companion, came over for nosh and movie night. When she walked in the door, The Adorable Monster nearly lost his fur brain, crying and jumping for joy. He loves the A-Girl, and I think that the feeling is mutual.

For our dinner, I decided to make a dish that captured the best flavors of breakfast--savory, creamy, meaty, sweet. This is a take on pork and apple sausages with grits. To make it, I sous vide pork tenderloin and pan seared it. I served it sliced with a topping of Apple-Bourbon Coulis, all over Parmesan Grits.

The results were heavenly, with flavors of tender, juicy pork, apple, a hint of bourbon, and the parmesan and soft grits. It was breakfast for dinner! 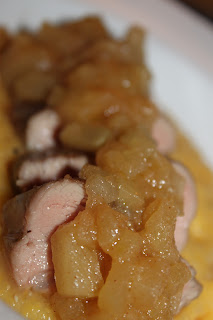 To plate, slice the pork tenderloin and lay out on a plate over Parmesan Grits. Spoon the Apple-Bourbon Coulis on top of the slices. Enjoy!

From Saxum:
"The Heart Stone Vineyard is a small 7 acre vineyard planted on a gentle South slope of limestone and shale. With 8 different clones of Syrah, 4 of Grenache and 1 Mourvedre, we aim to produce a wine that is both compelling and complex. We typically co-ferment all the varieties together with a high proportion of whole clusters, producing a tannic and spicy wine that has great purity and complexity. We age this wine with very little new oak in mostly larger puncheons for 20-28 months. Like all our wines, they are never racked off their lees and are bottled unfined and unfiltered."
Posted by Jennifer Brody at 8:42 AM