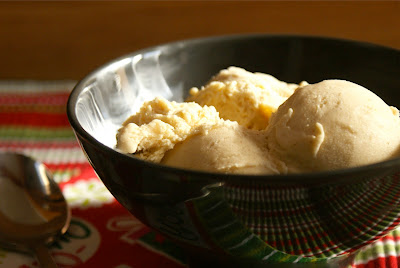 This time, she's written up a fabulous recipe for Toasted Cinnamon Ice Cream. My mouth is watering just looking at her beautiful photography. Few things in the world taste better than homemade ice cream. And, even if you don't have an ice cream machine, she's included a link to a no machine recipe. She sure thinks of everything!

From Jen H. of Piccante Dolce:
I'm so excited to be back guest posting on Domestic Divas.  Since we are in the throes of the holidays,  I thought I'd share a recipe for a rich and creamy holiday ice cream. I love the flavor of cinnamon and especially love how most desserts and even some drinks during the Thanksgiving and Christmas seasons are infused with cinnamon. One of my favorite winter beers, Harpoon Winter Warmer, is full of cinnamon and nutmeg and thought I'd love to try to turn that into an ice cream, it's unfortunately a Boston craft beer that's not available here in Toronto

So I decided to take the cinnamon, toast it, and turn it into an uber rich ice cream. One that can be paired with pies, put into profiteroles, on top of brownies or even just eaten on it's own, my favorite way to enjoy ice cream.

I am lucky to have received an ice cream maker as a wedding gift this past summer and use it every chance I get. For those of you without a machine it's actually quite easy, if a bit time consuming to make ice cream without one.  Ice cream guru to so many foodies and bloggers, David Lebovitz, posted his no machine method here and I know several people who have used this method and love it.


I made this ice cream for my parents Thanksgiving dinner and it was a hit. Everyone loved it and I loved it so much that I made it again this week, just to keep in the freezer and have little spoonfuls every once in awhile. Total guilty pleasure, but I have convince myself that bites of ice cream hear an there is better than eating tons of Christmas cookies.

Directions
Preheat the oven to 350F.

Place 8 cinnamon sticks on a baking sheet and into the heated oven. Toast for 10 minutes. Place the toasted cinnamon stick in a saucepan with the milk. Heat to a simmer over medium heat. When the milk starts to bubble, remove from heat and cover. Let steep for 1 hour.

Create a water bath in a large bowl and place a smaller bowl in it with the 2 cups of heavy cream. In a separate bowl whisk the 5 eggs yolks. Add the granulated sugar, salt and ground cinnamon to the saucepan with the milk and cinnamon stick. Rewarm the milk to a slight simmer and temper in the egg yolks by add a small bit of warm milk at a time to the egg yolks, whisking constantly.

Pour the warmed yolks and milk back into the sauce pan. Cook over low heat stirring constantly, scraping the bottom with a silicone spatula. Custard is cooked when it coats the spatula and leaves a line when you drag your finger through it.

Strain the custard and brown sugar to the cream. Stir until cool. Cover and place in the fridge until completely cooled.

Freeze according to your ice cream makers instructions. If you don't have a maker, check out David Lebovitz's instructions.
Posted by Jen H at 9:48 AM