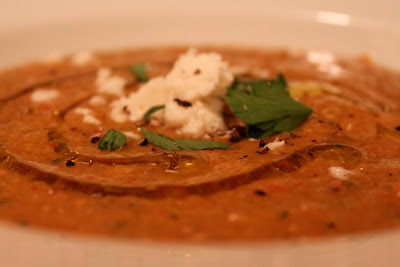 If you're a Domestic Diva like me, then this is reason to rejoice. Many of us were raised on tasteless, picked when they were green and ripened artificially in transit, grocery store tomatoes. A culinary travesty, if you ask me.

Tomatoes are one of my top five desert island foods, however, I don't eat them out of season. Instead, I go on a self-imposed tomato fast, waiting for the moment, in the peak of summer, when the heirloom tomatoes roll into my farmers market like chubby, cherubic invaders.

Fortunately, I don't have to wait any longer because the heirloom tomatoes are here. These tomatoes come in a variety of colors, shapes, and sizes, from purple, to yellow, to green and everything in between. For this reason, they weren't chosen for large scale agriculture, but instead have been raised by smaller farmers.

At the Hollywood Farmers Market on Sunday, I was thrilled to discover that my favorite heirloom tomato vendor was selling imperfect heirloom tomatoes (sunburned, or slightly damaged) for one dollar a pound. Let me repeat that. One dollar a pound. That's an incredible bargain. I scooped up a pound of these castoff beauties and whisked them home, prepared to turn them into gazpacho, a chilled soup made out of fresh vegetables.

I pureed the tomatoes with cucumber, bell pepper, jalapeno and red onion, adding some balsamic vinegar, olive oil and salt. Then, I served this lovely, golden yellow soup with a drizzle of lemon olive oil and a crumbling of fresh goat feta.

The heirloom tomatoes really added a level of sweetness and freshness to this  gazpacho. It tasted so purely of summer - bold, fresh, ripe, sweet - that I'll be making it every week until the end of tomato season. Gazpacho is great served for lunch with toasted garlic bread or as an appetizer at dinner.

Directions
Place the tomatoes, cucumbers, peppers, jalapeno, red onion and garli in a blender and puree together until combined but still a little chunky. Add the balsamic vinegar and the olive oil and mix together. Season to taste with salt and pepper. Chill the soup for at least an hour in the refrigerator (may be made a day in advance and kept in the fridge).

To serve, ladle the soup into bowls. Crumble some feta cheese on top and drizzle with the lemon olive oil. Top with a little fresh cracked pepper. Enjoy!