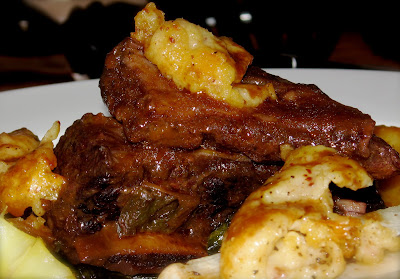 Wow, even the name of that recipe is a mouthful!  A delicious, meaty, rich mouthful, but still a mouthful nonetheless!

So last week, I once again took on Charlie Trotter, my culinary hero, and lived to tell about it.  The mission?  To cook Trotter's version of Zinfandel Braised Short Ribs featured in the "Beef" section of his wonderful cookbook, The Kitchen Sessions with Charlie Trotter.  No simple task, I'll tell you.  Not only did this recipe require a 36 hour marinade, but it was a full two-pager with lots of individual steps.

Here's a play-by-play of how it all went down!  I'll list my steps, but for the full recipe, you'll have to invest in Trotter's cookbook, money well spent if you want to take your cooking up a whole notch, or maybe even, several notches. The book is currently available on Amazon (CLICK HERE!). 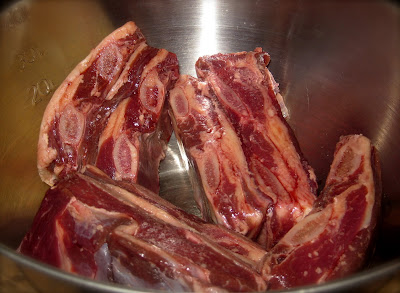 As I mentioned last week, instead of using traditional beef short ribs, I decided to use grassfed bison short ribs that I was fortunate enough to scoop up at the Hollywood Farmers Market from Kathy Lindner, owner and proprietor, along with her husband, of Lindner Bison.  They use both humane and sustainable practices - their bison are grassfed and raised without hormones and drugs.  I made only one other small substitution - instead of mustard greens, as called for in the recipe, due to their nonavailability, I used collard greens. 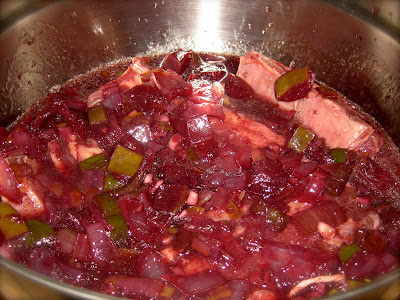 The first step involved making the marinade!  This step had to be done at least 24 hours prior to cooking.  I began by caramelizing onions, leeks, Granny Smith apple, garlic and jalapenos.  Then, I added a whole bottle of Zinfandel and brought it to a simmer.  I allowed that mixture to cool, and then I added the short ribs, olive oil, thyme, sage and a satchel of coriander seeds made out of cheesecloth and tied with kitchen twine.  I covered the mixture tightly and refrigerated it for 36 hours (the recipe specifies a marinading time of 24-36 hours).  Talk about delayed gratification!

In the meantime, I exercised what I considered to be extreme patience, given my proximity to short ribs, and invited the A-Girl over for Friday night supper.  When she heard the menu, her response was, "Ummm... hell yes!" 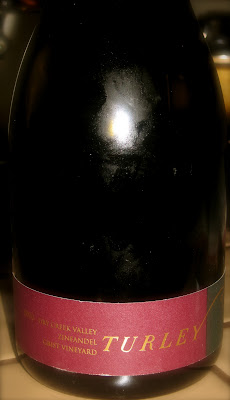 I also held a wine pairing summit with Kuzak.  In my cookbook, the wine notes for this dish suggest pairing it with a Zinfandel.  Well, duh!  "The rich meat from the short ribs melts in your mouth and needs the cleansing quality of tannin to cut through the richness," I read aloud to Kuzak.  Cue mouth watering.  He suggested we pop a bottle of Turley Zinfandel, one of my very favorite producers.  Luckily, Kuzak had a bottle of 2004 Dry Creek Valley, Grist Vineyard squirreled away in his cellar that needed to be drunk. 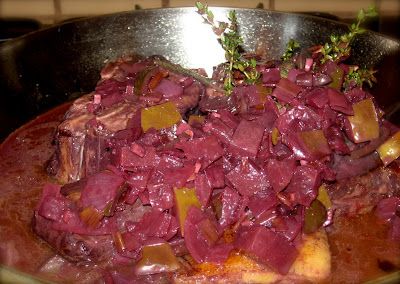 After what may have been the longest 36 hours of my life, I removed the short ribs from the refrigerator and prepared to braise the living bejesus out of them!  This involved first removing them from the marinade and searing them in a hot pan until golden brown.  I did this in my favorite pan of all time, my All-Clad Braising Pan!  It goes from stove top to oven in a flash, and is specifically designed to make this sort of dish, though I pretty much use if for everything.  After searing the ribs, I added the marinade to the pan along with some chicken stock, and then covered it and placed it in a 350 degree oven.  Then, I had to exercise even more extreme patience, while the ribs braised for 3 to 4 hours, until the meat was fork tender.

Two things became instantly clear.  1) This was not a dish for the weak-willed.  Rather, it was like meditation boot camp!  Clear your mind.  Do not think about short ribs.  I repeat, DO NOT think about short ribs, delicious, falling off the bones, tender ass shorts ribs.  2) The smell emanating out of my oven was intoxicating!  I literally couldn't wait for dinner.

But wait, I still had like a gazillion other components to prepare!  Here's the rundown.  After the ribs were literally fork tender, I pulled them from the oven, removed them from my braising pan and set them aside.  And yes, I cheated, and nibbled on a rib, and already I knew this dish was going to be a winner, even if I messed up every single other element!  Next, I reduced my braising liquid by simmering it stove top until it I had about 1 1/2 cups left. 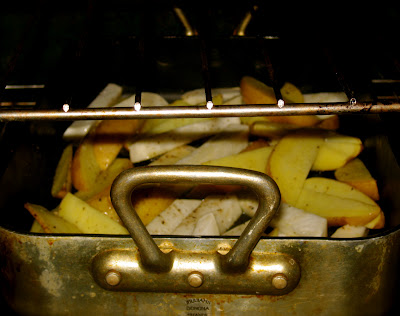 Meanwhile, I roasted some thick cut Yukon gold potatoes and turnip, the aromatic vegetables, in the oven with salt, pepper and olive oil, until they were tender. 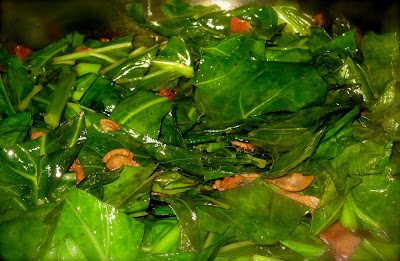 After that, it was on to the collard greens.  These were prepared by rendering bacon in a saute pan (yes, this brilliant dish has both short ribs AND bacon, and now you understand why I've been obsessing!).  Then, I added the chopped greens, a little balsamic vinegar, a little sugar and some water, and cooked them for about 15 minutes, or until they were tender.  Lastly, I seasoned them with salt and pepper.  Whew! 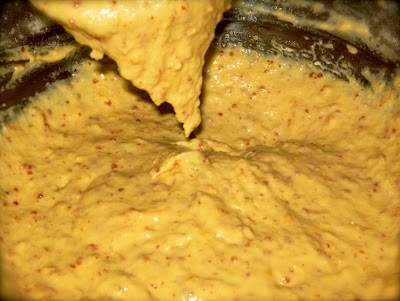 At this point, I know, it seems like I should be finished, but I still had one major component left to make: the mustard spaetzle.  Now, I could have easily forgone this step and the dish would have been great, but I knew the mustard would pair well with the short ribs.  So, I jovially called out to the A-Girl, "It's spaetzle-making time!"  She smirked at me, "You sound like an old, Jewish woman!"  And maybe I did, but I didn't care.  I quickly stirred together eggs, mustard, flour and milk, whipping them into a stiff batter.  Then, I spooned teaspoons into simmering, lightly salted boiling water, cooking the spaetzle for a minute, until they floated.  Finally, I quickly sauteed them in butter and seasoned them with salt and pepper.

The last hurtle in this marathon?  Plating.  I reheated the ribs in the oven.  I placed some greens in the bottom of each bowl and topped them with the ribs.  Then, I arranged some potato and turnip wedges in the bowl, sprinkled them with the mustard spaetzle, spooned on the braising reduction and finished the dish with a dusting of fresh ground pepper.

Wow, what a marathon!  Over twenty-six culinary miles, multiple hurtles, obstacles, but was it worth it in the end?

The short answer to this short rib question is YES!  We sat down at the table on my porch, each with a hearty glass of Turley, and dug into the dish.  The ribs were everything I've ever wanted from a piece of meat - tender, rich, melt in my mouth goodness.  Every component of this dish was delicious, from the greens, wow, what amazing greens, to the sweet turnips and potatoes, to the rich braising sauce.  Even the mustard spaetzle was great!  Even better, we all decided that bison was a complete revelation!  It seemed to possess a deeper, richer flavor than beef, and it worked perfectly for this recipe.  Even the Adorable Monster agreed, as he greedily licked a bison bone clutched in Kuzak's hand.  I can't wait to try more bison!  Thank you to Lindner Bison!

Oh, and did I mention the Turley?  A wonderful, full-bodied wine with great tannins and flavors of raseberry.  It paired beautifully with the meal and disappeared far too quickly, as did the short ribs on our plates.

And there you have it, my Divas!  Another victory for Charlie Trotter!  And, if I may be so bold, another victory for the Diva!  I know I'll be making short ribs again in the near future, just as soon as I feel I've built up enough patience to withstand the delayed short rib gratification yet again!

Run by the husband and wife team of Kathy and Ken Lindner, Jr., they specialize in bison raised humanely and sustainably.  Their bison are grassfed, free of drugs and hormones.  Bison meat tastes similar to beef, but with what some describe as a fuller, richer flavor.  They can be found selling their grassfed bison at the Hollywood Farmers Market on Sunday.  CLICK HERE TO VISIT THEIR WEBSITE.

This is hands down my favorite cookbook.  At this point, my copy is stained, dog-eared, but still working its magic in my kitchen, just the way a good cookbook should be! This is the book that changed my cooking and, therefore, my life.  Working with his recipes, and his flavor profiles, one cannot help but be blown away by his culinary genius.  Like a jazz musician, he takes an improvisational approach to cooking, which allows flexibility in the kitchen to work with the best ingredients available.  Every Charlie Trotter recipe I've ever made has turned out nothing less than stellar.  Currently, in stock at Amazon.

Wow, this album is incredible!  Now, I'll confess up front that I'm a huge Pearl Jam fan, but even the casual listener would enjoy this new album, easily their best effort since 1998's Yield.  It's a tight listen, with a runtime under 40 minutes, super-catchy and upbeat.  The first single in particular, The Fixer, will stick in your head for days.  It's in mine right now.  I can't wait to see them in Los Angeles at the Gibson Amphitheater on October 6th!  I already have my fan club tickets reserved.  So check out the new album!  You won't be disappointed! Available exclusively at Target and on iTunes.
Posted by Jennifer Brody at 10:50 AM