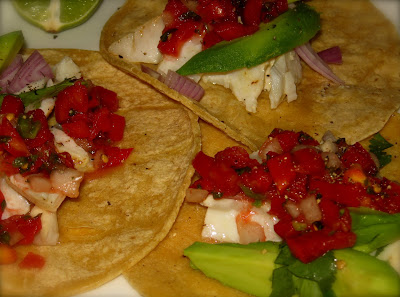 It's another hot day at the end of a hot week, and when I'm sweating my ass off, huddled by my air conditioner, there are typically only two types of foods that appeal to me.  The first is sushi, with its cold, clean flavors, and the second is spicy food!  I know, it seems counter intuitive to crave something that only promises to make me sweat more, but for some reason, it chills me out (pun intended).  Maybe it's the endorphins, or the fact that psychologically, I feel like I'm sweating due to scrumptious food and not out-of-control global warming horriblenes that makes me feel better!

So yesterday, at the peak of the mid-afternoon heat, I started fantasizing about fish tacos.  Lovely, spicy, limey tacos!  Luckily, I already had some fresh halibut lurking in my fridge, so on the way home from my workout class, I hurried into Trader Joe's to scoop up the rest of the ingredients I needed.  Then, I whipped up a batch of delicious fish tacos and served them with a side dish of black beans topped with queso fresco. 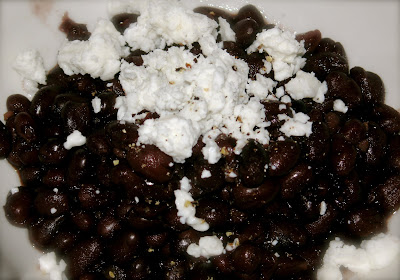 Then, Kuzak and I settled onto the porch to down our spicy meal because it was far to hot to eat in the house.  While the meal was excellent, the Adorable Monster, true to his name, was not.  Left to his own devices after being cooped up in the house all day, he ripped a pillow to shreds, scattering the fluffy stuffing all over the bedroom!  I think he's reached his terrible-one's, although in dog years, doesn't that make him like 7 years old?  Regardless, he was in the dog house.  No taco-plate-licking for him!

So, back to tacos!  Because this dish is so easy to make, so quick to come together and so healthy, I'm decided to include it as part of my "Simple Suppers" series.  So without further ado, enjoy!

In a bowl, whisk together the jalapeno, lime juice, cilantro & olive oil.  Season to taste with salt and pepper.  Add the fish and marinate for 15-20 minutes. 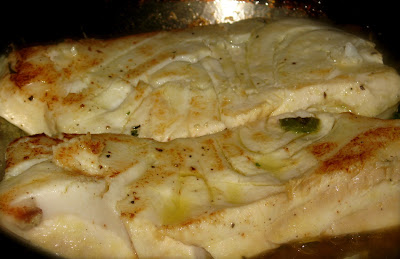 Heat the grapeseed or canola oil in a saute or grill pan over medium high heat.  Remove the fish from the marinade and add it to the pan, cooking for a few minutes on each side until cooked through.  Remove from heat and allow to cool.

Note: The fish may be grilled for extra flavor!

Meanwhile, in a cast iron or other skillet, warm the corn tortillas and place them on plates.

Next, once the fish has cooled, separate it into flakes.

To prepare the tacos, put some of the fish in the center of each tortilla.  Top with some red onion, cilantro, avocado slices and a heaping teaspoon of pico de gallo.  Serve with lime wedges.  Enjoy!

halibut from the Hollywood Farmers Market

So, for a moment, I've surfaced from listening nonstop to Pearl Jam's new cd, Backspacer, and have been digging on Okerville River's The Stage Names.  The album (released in 2007) is a companion of sorts to 2008's The Stand Ins, and boy do both of these albums rock!  Their sound is reminiscent of the overly hyped band, Bright Eyes, but I think these guys surpass them, especially with the maturation of their sounds on these latest two efforts.  I highly recommend checking out this band!  I'm completely in love...
Posted by Jennifer Brody at 9:59 AM