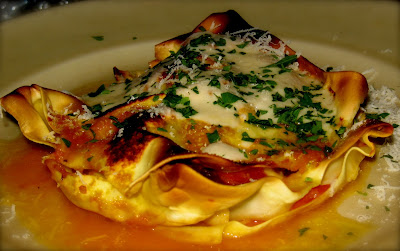 What trip to San Francisco would be complete without a stop at Chez Panisse, the famous Alice Waters restaurant that started it all? We chose to dine at the cafe instead of the more formal, Prix Fixe restaurant. The larger array of choices suited our big party best. Also, My Top Brother prefers the more casual atmosphere, especially on his days off from kitchen slavery. But just because the restaurant is more casual, doesn't mean it's lacking in any way. The service and food remain stellar, and exemplary of Water's style. The menu is packed full of fresh, local, seasonal offerings, and while the menu items may sound ordinary - a vegetable lasagna for instance - they are anything but ordinary when eaten.

At my Top Chef Bro's suggestion, we began the meal with a simple pizza for the table topped with wild nettles, a green that has a taste similar to spinach when cooked. While it does have poisonous needles, it can be rendered edible by soaking it in water before cooking it. This pizza was hands down one of the best I've ever tasted, full of complex fresh flavors of onion and garlic, and the tenderest of greens. It disappeared almost as soon as it was set down on the table. 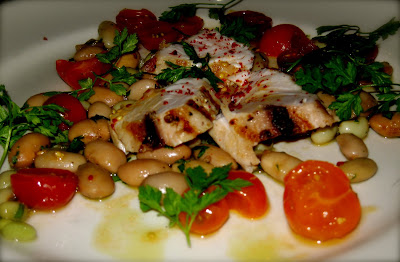 After the pizza, I dined on a tremendous appetizer of grilled, local albacore, cranberry beans, cherry tomatoes and chervil. The fish was so fresh, clean, perfectly cooked, as were the accompanying beans and tomatoes. A refreshing, light, perfect way to continue the meal. Next, for my entree, I ordered the vegetable lasagna, something I'd rarely choose, but that I found myself unable to resist when I saw it matriculate to other diners' tables. This lasagna was no ordinary pasta dish. For starters, it was fired in their wood oven, gently charring the exceptionally thin pasta, almost giving it the texture of flat bread. It was also loaded up with fresh vegetables, including eggplant and tomatoes. Finally, it was the perfect portion size - filling, but not overwhelming - and when eaten, it didn't weigh me down like lasagna usually does. 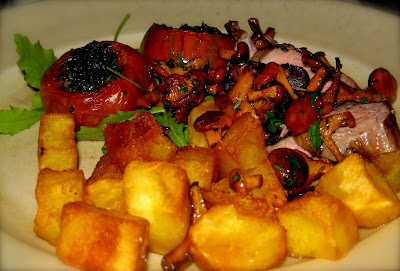 Another favorite dish that I was fortunate enough to sample, thanks to my Top Chef Brother, was the Cattail Creek Ranch lamb leg, grilled to medium rare, served sliced with chanterelle mushrooms, roasted tomatoes stuffed with pesto and perfectly crispy potatoes. This dish was a true winner! The lamb had unbelievable flavor, and when paired with the mushrooms, the earthy flavors brought out the best in the meat. And the potatoes - lightly blanched and then fried - were beyond heavenly!

As we polished off desserts, I came to the realization that Alice Waters really is a complete genius! Her food, like her cafe, can appear deceptively simple to the untrained eye, but when you dine at her restaurant, the brilliance of her food is undeniable. I'm not saying anything here that hasn't already be said or written about Chez Panisse a thousand times, but if you've never had the pleasure of dining at this establishment, I highly recommend making the trip next time you're in the Bay Area. I promise, you'll thank me!

Stay tuned to find out where I had the best meal of the year!!! I'll give you a hint: it wasn't in California!

Alice Waters' famed Berkeley establishment, the cafe is a wonderful alternative to the more formal restaurant. Dine on her food in a relaxed atmosphere and save a buck while you're at it!

Thursday night, I had the privilege of attending the last show of Nine Inch Nails' Wave Goodbye Tour at the Wiltern Theater in Los Angeles. The tour of small clubs was being billed as the last time Trent Reznor will perform as Nine Inch Nails. So while I felt slightly nostalgic taking in the performance, the show was spectacular, featuring over three hours of music and almost forty songs, including favorites like The Ruiner, Mr. Self Destruct, La Mer, Piggy (Nothing Can Stop Me Now) and Dead Souls. While Trent is finished touring as NIN, he promises to continue to make music, with several projects already in the works. It's sad to wave goodbye, but I'm excited to see what he has in store for us next!

To view the complete setlist, CLICK HERE!
Posted by Jennifer Brody at 2:29 PM