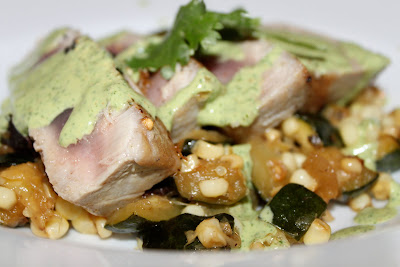 In the heat of the summer, I'm always looking for culinary ways to cool off. I make raw vegetable salads, cold soups, and lighter meals. Even the Adorable Monster was feeling the heat. When our neighbors invited us over to their pool, I brought him with me and took him for his second ever swim. You wouldn't think it by looking at him, but he's quite the swimmer! In between trying to swipe grilled steak and chicken off unattended plates, he had a blast paddling around the pool. And afterward, he was even curlier than usual. A regular poof ball of fur.

So two weeks ago, with temperatures soaring into the mid-90's, I picked up some gorgeous, deep red Ahi Tuna from Whole Foods. One of the things I love most about Ahi Tuna is that it only needs to be seared, not cooked all the way through, which makes it taste fresh and clean. After some serious foodie meditation, I settled on making a cilantro yogurt sauce with fresh organic cilantro and plain Greek yogurt. I theorized that the sauce would give the dish an herbaceous, refreshing component.

Boy, was I right! It was so tasty I wanted to eat it with a spoon. Seriously, cilantro flavored yogurt anyone?

To finish the dish, I whipped up a Sweet Corn Hash with Vidalia onions and organic zucchini in my cast iron skillet. The combination of the cilantro-yogurt sauce and the sweet corn hash was so delectable that I ate the leftovers with a fried egg substituting for the tuna the next morning. It was almost better, if that's possible. So stay cool this summer with this recipe!

Directions
To make the sweet corn hash, heat the olive oil in a cast iron skillet or saute pan.  Add the onions and cook until beginning to soften (about 5 minutes). Add the garlic and saute for one more minute.  Then, add the zucchini and cook until becoming tender. Add the sweet corn kernels and cook the hash down in the skillet until it's tender and the onions are beginning to turn into jam. Season to taste with salt and pepper.

Meanwhile, to make the cilantro-yogurt sauce, place all of the ingredients except the salt and pepper in a food processor or blender and process until smooth. Season to taste with salt and pepper.

To cook the tuna, sprinkle both sides of the fish generously with salt and pepper.  Heat the grape seed oil in a saute pan over high heat. Place the fish in the pan and quickly sear on all sides (about one minute per side).  Remove from heat and allow to rest for at least five minutes before cutting into slices.

To plate, spoon some sweet corn hash onto a place. Top with pieces of sliced tuna and drizzle with the cilantro yogurt sauce.  Finish with chopped cilantro and fresh cracked pepper. Enjoy!

Wine Pairing
On this night, Kuzak was craving cabernet sauvignon, so we popped a bottle of 1994 BV Private Reserve George De Latour. I picked up the bottle while visiting the winery in Napa with The Wine Lover (my father). We decanted the wine first to allow it to open up. Heck, it had been in a bottle for more than fifteen years. The first whiff I took held great promise - musky, earthy, some latent fruit percolating up through my nostrils. It smelled just how aged cab should. The wine drank beautifully all night long, full of musk and blackberry fruit. It was a fabulous accompaniment to a softer meal, lovely but not overpowering. A great effort from a legendary producer. Bravo.
Posted by Jennifer Brody at 9:18 AM