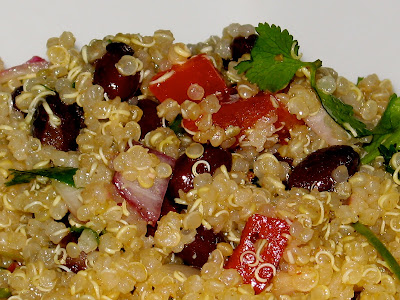 Oh, Divas, what a lovely weekend!

Kuzak's parents were in town, which meant lots of dining, and incidentally, a lot of horticulture. I'm happy to report that I'm now the proud owner of an herb garden, out on my deck.  I just hope it doesn't perish (I do not have a green thumb, not even a slightly brown one).  For foodie activities, we had a fabulous meal at Lucques (one of my favorite LA restaurants), an authentic taco lunch at Pinches Tacos (I eat here at least once a week), a trip to the Hollywood Farmers Market (my fridge if full of everything from fava beans to baby squash), but we saved the best for last.

It all began on Sunday morning with a close encounter of the Mario Batali kind.  That's right, my dear readers, when we pulled up to the hotel to pick up Kuzak's parents, the unmistakable Mario was waiting right in front.  There was no doubt--ginger hair, ponytail, shorts, orange crocks.  You'd have to blind to miss him.  Yes, I said hello to him like an over-enthused groupie (I had met him once before) and told him that as fate would have it, we were dining at his restaurant, Osteria Mozza, that very night.  Yes, I shook his hand (soft as butter).  And yes, I thoroughly embarrassed myself, but I don't care.  I'm in love with his food, and there's no reason to be embarrassed about that.

Dinner at Mozza was, in a word, spectacular, but isn't it always?

The fresh burrata and mozzarella, the pastas (I could write an entire essay on the bolognese alone) and the entrees, fatty, tender veal breast, duck al mattone (cooked under a brick, served on a cutting board with lemon meyer jam) the hailbut with green peppercorns (the secret is veal stock in the sauce, as my waiter whispered in my ear), the desserts with gelato, gelato and more gelato.  This was my second meal there in under a week, and I know I'll be back soon.

Alright, onto Meatless Monday, which Mario Batali has adopted into all 14 of his restaurants (nice segue, huh?).  I made this little gem of a salad last week for lunch.  It combines the high-protein whole grain, quinoa, with black beans, also a good protein source.  I also added chopped bell pepper, purple onion, cilantro, lemon juice, olive oil and cumin to it, and served it cold.  I loved this Southwestern inspired salad so much, I might make it again this week! 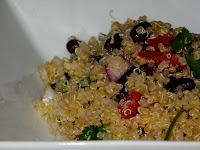 In a separate bowl, whisk together the olive and lemon juice.  Then, pour the lemon-olive oil mixture over the quinoa mixture.

Toss well and then season to taste with salt and pepper.  Enjoy!

organic cumin from Whole Foods
Posted by Jennifer Brody at 10:32 AM