For The Love of Cooking! The Domestic Diva Reviews "Julie & Julia"! 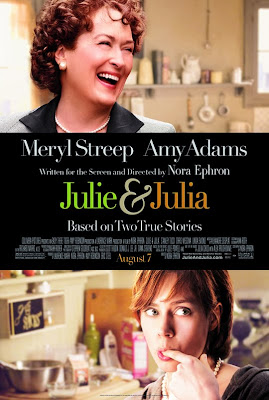 Just about every food blogger has already weighed in on Nora Ephron's new movie, Julie & Julia, so I might as well give my two cents, too! Based on the book of the same title, which in turn was based on food blogger Julie Powell's blog, the movie tells a dual narrative. On the one hand, it depicts Julia Child and her journey to discover French Cooking, and then ultimately, to bring it to American women by writing her famous cookbook, Mastering the Art of French Cooking. On the other hand, it tells the story of cubicle slave, Julie Powell, and her insane mission to cook every recipe in Child's book, over five hundred of them, in 365 days, and then to also write about it via her blog.

While Julie calls herself a contender, taking on Julia Child, it is more than clear who the actual winner is. I'll give you a hint. Her first name ends with an "a." Pretty much every review has heralded Meryl Streep's joyous portrayal of Julia Child, a performance that at times borders on caricature, but certainly captures the essence of her character. And pretty much every review has maligned the screen time devoted to Julie, who comes off as childish, peevish, bitchy, and strangely afraid of eggs. I mean, what did an egg ever to do her? More Julia, less Julie seems to be the consensus.

So I knew all of this when I ventured to the theater. Earlier in the year, I'd tried to make my way through the book itself, only to throw it down in frustration after one two many rambling diversions away from the story, but I'd hoped that the adaptation would streamline out these flaws. And it did for the most part, capitalizing on a great vehicle to bring us Julia Child and the Parisian world she inhabited. Yes, my mouth watered. Yes, it was exciting to watch Julia get ravenously worked up over Beef Bourguignon, a dish I happen to love so much I would consider marrying it.

But something was missing from the movie. Or at least, from half of it. And I think I figured out what's bothering me so much about it. Julia Child, and her half of the narrative, is the past of cooking. A time when women actually took the time to prepare family meals. When a cookbook like Mastering the Art of French Cooking could succeed because women were willing to invest in making recipes with real ingredients.

But would Julia Child succeed today, in the primetime of Rachel Ray, or even worse, of fast food and chain restaurants, when everyone is looking for a shortcut, when most people don't even know where their food comes from? I hate to say it, but probably not. She's not flashy enough, not marketable enough. We'd probably look at her the way her first publisher did when she proposed seven individual cookbooks, with one devoted entirely to eggs. We'd tell her she was crazy. I mean, who cares that much about eggs?

But that's not even what bothers me the most about the movie. If Julia Child is the past, then Julie Powell is the present. Her approach to cooking is less about joy than about finishing a grueling marathon, one that sucks the marrow right out of cooking. She doesn't enjoy making almost any of her dishes. Instead, we see temper tantrums thrown on the kitchen floor, dishes dropped, splattered and tossed around the room, followed by more tantrums, followed by blogging about her tantrums, or her fights with her husband, the poor sex-deprived bastard. We see dishes burned, dried up, pushed away. Oh, and I haven't even gotten to the eggs yet.

Watching the movie, I couldn't help but think that Julie was cooking for all of the wrong reasons, and in the process, destroying everything and everyone in her path. I always tell my friends that cooking is an act of love. Loving your ingredients, loving the amazing things you can create out of them, and then selflessly giving the love to those around you! Just watch Julia Child shop in the Parisian markets or joyously chop onions in her Le Cordon Bleu class. That is what cooking should look like. That is what it should feel like. And, most importantly, that is what it should taste like.

Yes, Julie finished her marathon, and yes, she scored a major book deal, one that I'd be lying if I said I wouldn't want for myself, and now it's also a movie. And she did bring us back to Julia Child on a road greased with butter, butter and more butter. So, I suppose, who am I to criticize her at the end of the day?

Just a Food-Loving Diva, that's who!
Posted by Jennifer Brody at 9:04 AM

Email ThisBlogThis!Share to TwitterShare to FacebookShare to Pinterest
Labels: Flicks and Food