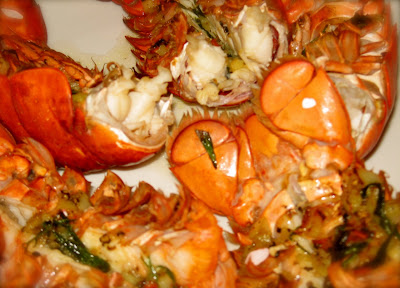 Summer is here with a vengeance! In Los Angeles we've been weathering a two week heat wave with temperatures soaring into the 90s almost every day. Even the Adorable Monster has been a little less energetic lately, curling up on the kitchen floor to try to cool off. My cooking habits have also shifted, mostly due to the fact that the idea of standing in front of a hot stove sounds torturous, especially considering my lack of air conditioning. Not to mention that using the oven would be a crime against humanity and monsters alike.

Instead, I've taken to making chilled soups, lots of salads, and of course, firing up the grill, that staple of summer life. One of my favorite things to throw on the grill is lobster tails! I love the way finishing them on the grill gives them more flavor than just boiling. There's something about grilling lobster that just feels decadent and wonderful, too. To add some zip, I baste them with a butter sauce loaded with tarragon, lemon and tons of garlic. I served them with corn and a salad for the perfect summer meal. Even Kuzak, not a huge lobster fan, was licking his fingers at the end of the meal.

First, parboil the lobster tails by placing them in a pot of boiling water for about 3 minutes, depending on the size of the tails. Remove from the water when still just a little bit undercooked and allow to cool.

Once the shells have cooled, flip the tails on their backs and slice down the middle of the meat, leaving the shell intact.

To make the sauce, in a small sauce pan, melt the butter. Add the lemon, garlic and tarragon. Season to taste with salt and pepper.

Heat the grill. Once it's hot, place the lobster tails on the grill with their shells down. Generously baste them with the sauce while they finish cooking. Remove from the grill and enjoy!

lobster tails (on sale for the 4th of July), organic tarragon & organic butter from Whole Foods