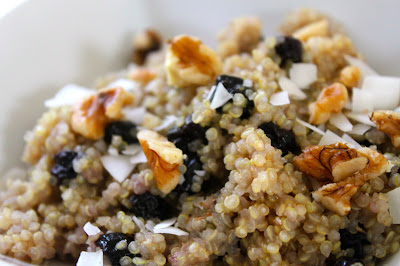 As my adventures in gluten-free eating continue, I was craving an oatmeal-esque breakfast.

I'd heard of quinoa being used as a gluten-free breakfast hot cereal, so I decided to give it a shot. Quinoa is packed with protein and has a great, nutty flavor. I cooked mine with rice milk (though you could use regular milk or even water). In the last five minutes of cooking, I stirred in dried blueberries and cinnamon. I served it with chopped walnuts, toasted coconut, and maple syrup.

However, you could try many different variations. The resulting dish was delicious and super filling. A nice change of pace from the usual breakfast suspects. 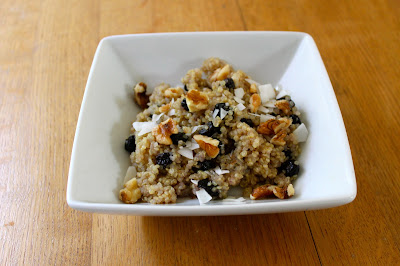 1. In a saucepan, bring water or rice milke to a boil. Stir in the quinoa, reduce heat to low, cover and cook until three quarters of the liquid has been absorbed (about 15 minutes).

2. Stir in the dried blueberries and cinnamon. Cook for another five minutes, or until most of the liquid has been absorbed.