The Adorable Monster Sleeps Through Earthquake 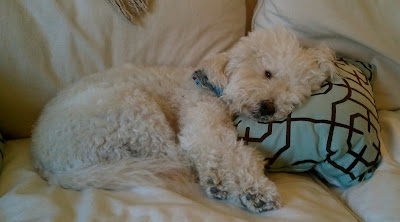 It's been awhile since I've posted about the Adorable Monster, my crazy mini-golodendoodle who is fast approaching the ripe old age of three. That's twenty-one in human years.

Yesterday, an earthquake struck Southern California--only a 4.2 on the scale--but enough to shake the house and rattle Kuzak's high rise. He texted me to ask if our dog sensed the earthquake before it struck and led me to safety.

Yeah right! I thought as I read the text. Fat chance of that...

So I sent him this picture of exactly what the Adorable Monster was doing during the earthquake--sleeping! Also, note his preference for using pillows like a human.

Earthquake sensing is apparently not in his repertoire.

What are his main talents?

1. Waking me up. Every. Single. Morning. By pouncing on me wolverine style with his monster paws.

2. Getting overly excited when told he is going to the "dog park" (two words you should never say in my house, unless you want a fur ball flying through the air at you at top speed with paws extended).

3. Eating anything and everything he can get his furry paws on. This includes kitchen scraps, sticks, dead bugs, live bugs, leaves, hair bands, guitar picks, loose change, socks, underwear, bras, actually, any item of clothing, dish towels, and more.

4. Barking at every dog which walks past our house. Even though the same dogs pass the house at the same time. Every. Single. Morning. Somehow, it still excites him. Sometimes, I wonder if he's like a gold fish with shoddy long term memory. 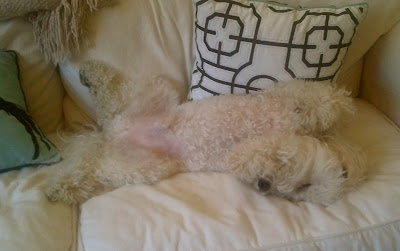 5. Sleeping in various contorted positions on the softest things in the house. At all hours of the day. Sometimes all day long.

6. And lastly--he has a talent for being extra fluffy. Seriously, that counts.

So there you have it folks! This concludes the Adorable Monster update.
Posted by Jennifer Brody at 11:03 AM