How do I know?

I know because tomatoes have finally hit my local farmers market. Tomatoes are to summer what Punxsutawney Phil is to spring. Terrible out of season, nectar of gods in season, this simple fruit is one of the great joys of summer.

I have many fond memories of feasting on sun-warmed tomatoes from my father's garden in southwest Virginia when I was growing up. I'd eat them like apples. There was always a massive box of them stored in our cellar, ripe for the taking. I even remember the time that my overly ambitious mother decided to make fresh tomato sauce and can it from hundreds of surplus tomatoes. It had been a banner year. We (meaning my two brothers and I) helped her crank them through an old press, the juice slurping out the other end like a geyser. We realized that if you ran them through twice, you could squeeze out twice as much juice.

The kitchen may have looked like something out of Saw IV when we were finished, but it was the best freaking tomato juice that I'd ever tasted. 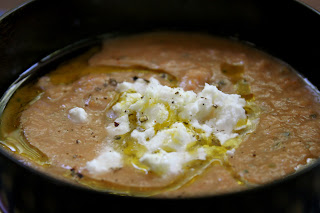 Food memory is a powerful thing. You carry it with you all of your life, and the smallest whiff can bring it rushing back like a tidal wave. I'm reminded of that as I think about the Chilled Gazpacho Soup that I made yesterday, my thoughts drifting back to the past. What does it bring to mind?

Many things. The first time I made this recipe was with my mother in Floyd a few summers back (here's a great recent New York Times article on Floyd). It's actually her recipe with a few extra flourishes. What else? My youngest brother, now a talented chef, loathed tomatoes growing up. They were his foodie kryptonite. He loved spaghetti and ketchup and all manner of things wrought from tomatoes, but despised the fruit itself. He also failed to see how illogical this was.

I remember the first time I tried an heirloom tomato from the farmers market. It teleported me back to my childhood, to my father's garden, to that box of tomatoes in my childhood cellar, the one where a giant blacksnake lived under the old freezer, which seemed as old as that very old farmhouse on Lake Drive. Seemed, but probably wasn't. That house dated back to Davy Crokett times, or so I liked to believe when I was a kid. We did discover a baby's tombstone in the basement that dated back to the 1800's. Most likely that infant was buried there during a hard winter, when the ground froze solid and the only soft soil for digging a grave could be found deep in that dark, dank basement, where more spiders lived than people.

All these memories from Chilled Gazpacho with Feta. You should try making a batch, the first of the season. See what glimpses of your past it dredges up for you. 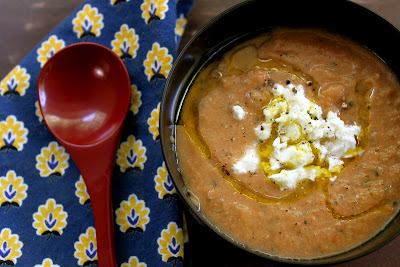